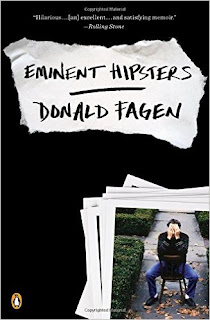 If I lived closer to LA, I would for sure make it to the Hollywood Bowl on Saturday night for Steely Dan performing with the LA Philharmonic for a program arranged by Vince Mendoza (hear some of Mendoza's work with Joni Mitchell on her stunning, modern versions of "Both Sides Now" and "A Case of You").

I picked up the book Eminent Hipsters by Donald Fagen recently, and along with lots of fascinating observations about the early New York jazz scene and esoteric items like a tribute to the Boswell Sisters and an interview with Ennio Morricone, it contains some interesting admissions about drugs.

Of his time at Bard College, Fagen wrote about a roommate who had "an endless supply of marijuana and nightly visits from an assortment of willowy girlfriends." A single tequila-filled night had him swear off the hard stuff and soon he was off to the 1967 "Human Be-In" in Central Park. He describes his classmates as "concerned with inner space....most of us were just incredibly self involved...primed to leave the repressive fifties behind and make the leap into the groovy, unbounded, sexualized Day Glo future."

They were also "smoking enormous quantities of weed, which had just begun to be co-opted by the middle class." Fagan says he "smoked a fair amount myself until a series of anxiety attacks scared me off in the winter of 1967." He thought the attacks might have been triggered by "the DMT my friends and I smoked during the big blizzard of that year."

"Dimethyltryptamine was the hallucinogen that Timothy Leary called the 'businessman's trip' because of its intensity and brief duration," he wrote. "You'd go from zero to a peak acid-strength high in a nanosecond. The snow that was billowing across the campus was revealed as an army of tiny angels, and you wondered why you hadn't noticed that the college buildings huffed and puffed as if they were in a Betty Boop cartoon from the thirties. Fifteen minutes later, everything looked normal except for a warm, lingering glow."

He then describes as a "mystic note" how he'd had his "introduction to Oblivion" during the summer of 1965 on then-legal LSD, guided by Huxley's The Doors of Perception and The Psychedelic Experience (Leary/Alpert/Metzner). "Let's just say that Dr. Leary's method was a resounding success," he wrote. "I understood for the first time that all was as it should be, that the future was blazing with promise and that, despite all the jeers, Garden State might be a swell name for New Jersey after all." 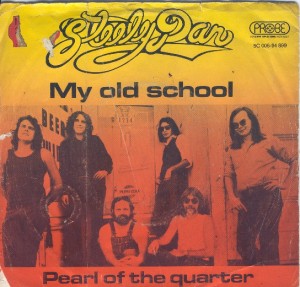 As a senior in May of '69, Fagen had his house raided at four in the morning by a police team lead by soon-to-be Watergate burglar G. Gordon Liddy, looking for traces of marijuana. Fagen's landlord had told police he'd sold him pot, a charge Fagen denies. Some 50 students along with former student Walter Becker and his wife Dorothy were jailed, and the men had their heads shaved. Charges were dismissed, but the incident caused him to boycott his college graduation ceremony in protest, and inspired the song "My Old School":

It was still September
When your daddy was quite surprised
To find you with the working girls
In the county jail
I was smoking with the boys upstairs when I
Heard about the whole affair...

The last time I saw The Dan at Shoreline Amphitheatre, Becker gave a great, long intro to their song "Hey, Nineteen" with the lyric:

Any night with Steely Dan is a wonderful place. They come with full regalia: three killer back-up singers, a horn section, a second keyboard, and a guitarist somehow able to recreate all the amazing solos from various artists on their albums.

Also Highly Recommended: the 1999 documentary about the making of the Steely Dan album Aja.

And, as this is Bloomsday, and while I'm in a literary frame of mind, see a fascinating analysis of Joyce's Ulysses by José Francisco Batiste Moreno: "Leopold Bloom's Tea Pot"