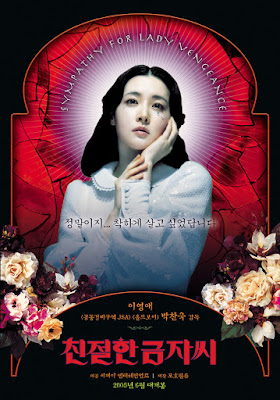 According to the Korea Times, actress Kim Bu-seon, 46, appeared on MBC TV in her home country on June 19 and spoke in favor of legalization. Kim launched a campaign for cannabis legalization in 2004 after she was arrested for marijuana use and sentenced to a suspended jail term. She then filed a petition with the Constitutional Court for a review of the constitutionality of the country's marijuana-related laws.

In the MBC interview, she protested the recent arrest of actor Oh Gwang-rok on charges of marijuana use, saying his actions caused no harm and that the drug did not affect his ability to act. "Have you ever heard of any news that I committed a crime after smoking marijuana? I have never done anything harmful, as politicians or thieves have," she said.

"Marijuana is not a narcotic; it is technically an Oriental herbal medicine which Koreans have used for 5,000 years," she said. "If smoking it doesn't do harm to others, those who do need it, such as those suffering from depression or cancer patients, should be allowed to use it. Marijuana increases appetite and improves sleep."

"Korea has the highest ratio of death by suicide among OECD members. The nation needs to take marijuana as a depression remedy and make depression patients come back to society....Whenever the government has troubles, it uses drug-taking entertainers to divert people's attention. It is the best way to make entertainers and artists obey the government,'' the astute actress told viewers on the live telecast. So far, MBC has not answered calls for an apology for the broadcast.

Oh Gwang-rok, most famous for his role as a wise man in “Taewangsasingi” (The Four Guardian Gods of the King), was arrested June 18 for smoking marijuana. Oh is suspected of having smoked marijuana on several occasions, including once in February at his house in Seoul. He allegedly smoked with the head of an unidentified information-technology company, known as Park, investigators said. Police said Park bought the pot from a local dealer and shared it with eight others, including animation film director Kim Mun-saeng. Oh has appeared in numerous films including “Seven Days” and “Sympathy for Lady Vengeance” (with Kim Bu-seon.) 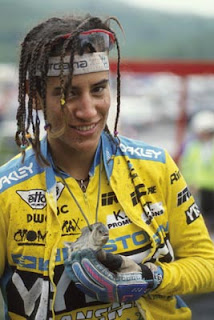 Meanwhile, former champion downhill mountain biker Missy "The Missile" Giove, 37, has been charged with marijuana distribution and faces up to 40 years in prison and a $2 million fine if convicted, according to The Daily News. Giove is the most successful woman in competitive mountain biking's history, grabbing a record 14 National Off-Road Bicycle Association championships and 11 World Cup wins. Known for her outrageous looks and daredevil riding style, she is openly lesbian, and was featured in a Reebok ad and interviewed by David Letterman.

Investigators spied on Giove as she got off a plane at the Albany County Airport and took a cab to a hotel, where she met a confidential informant and picked up a pick-up truck and box-trailer. Approximately 400 pounts of marijuana were found in the trailer and at co-defendant Eric Canori's house. "Drug trafficking can lead you downhill fast," Drug Enforcement Administration Special Agent John Gilbride quipped.
Posted by Tokin Woman at 8:39 PM No comments:

Megan Fox, starlet of the Transformers movies, has told Britain's GQ, "I can't tell you how much bullshit I've been through because I will openly say that I smoke weed. People look at it like it's this crazy, hippy, f*cked-up thing to do. And it's not. I hope they legalize it."

DOWNLOAD POSTERS OF JOSS AND MEGAN.
Posted by Tokin Woman at 11:20 AM No comments:

This Week’s Sermon from The Evangelista Sista

The evidence is in. In persecuting cannabis connoisseurs we’re effectively silencing the intelligencia, the artist, the poet, the peacenik – and it’s high time (ahem) it stopped. The other side has raised the white flag for a truce and it’s time to come to the table and negotiate a Peace for Pot package. We need our own two-state solution, with tolerance in between. As Allen Ginsberg said to Jack Kerouac in 1965, “It’s time for poets to influence American civilizaton.”

Our country’s version of the Tianamen massacre—the War on Drugs-- has arrested 20 million pot smokers, unlawfully detained or searched countless others, harassed, ridiculed, frightened, turned neighbors into informants and informees, and robbed our school budgets for prisons.  In fact, by some estimates if the WOD escalates at current rates, half of the country will be behind bars with the other half its keepers, here in the Land of the Free. Let’s not forget that softer rhetoric hasn’t always meant kinder policies.

How wimpy is our increasingly strident and un-listened-to conservative faction if it’s fearful of a little Latina on the Supreme Court? As if by saying she is proud of the way her brain works and would pit it against the whole of Mt. Rushmore and beyond, she would heartlessly rule against anyone. That’s our opposition’s job.

How popular are drug warriors these days? The UK’s home secretary Jacqui Smith, who successfully pushed for a rollback of Tony Blair’s more liberal pot policies (just after admitting she’d smoked it in college), has resigned in disgrace over a sweeping set of misuse of public funds scandals.

One of the recommendations of the Beckley Foundation report, presented at UN meetings in Vienna in June, is to look at cannabis and creativity.

Bob Hope told jokes about marijuana like, "Instead of taking it away from the soldiers, we ought to give it to the negotiators in Paris," and he just got his own postage stamp. His partner on the Road to Morocco, Bing Crosby, was an admitted smoker who advised his son to put down the booze and pick up the pipe. Sammy Davis Jr., who once played the caterpillar in Alice in Wonderland, was reportedly a viper. Rodney Dangerfield wrote about it extensively in his memoir No Respect, and said he saw Jackie Gleason procuring some from his hotel room in the 1940s. To say these icons aren’t representative of Americans is to belittle us, and them. And there’s been quite enough belitting going on.

Let’s start with the uplifting, already.

Keep Up the Good Words,

Posted by Tokin Woman at 6:14 PM No comments:

How wild, I just resurrected this blog exactly one year after my last post. And  the symmetry continues: where last year I celebrated the introduction of Barney Frank's national legalization bill, this spring I'm happy about the first-ever state legalization bill, introduced in California by Tom Ammiano (AB390). Read more.
Inspired in part by the Wanted: Female Pot Icons discussion at celebstoner.com, I'm doing a Tokin Woman show on KMUD radio on Wednesday, April 8 between 10 am and noon. I'll be playing tunes by Very Important Potheads Who Are Women, starting with Bessie Smith (hear her sing "Gimme a Reefer"). Stay tuned for more updates.
Posted by Tokin Woman at 2:45 PM No comments: