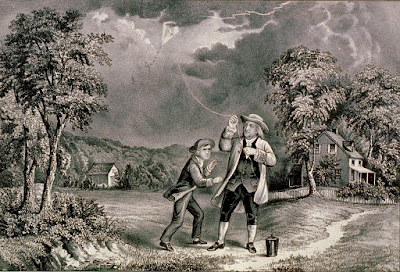 It seems that among hemp's many benefits to mankind, it helped Ben Franklin prove that there is electricity in the atmosphere.

For his famous experiment where he flew a kite in a 1752 lightning storm, Franklin fashioned the kite's string from hemp twine, since he knew that when wet, hemp conducts electricity. He added a nonconducting silk string to serve as a ground, but by one account couldn't resist touching the hemp string himself and getting a shock after he "watched the lightning raise the hairs on the hemp kite string."

"As honest Hodge the Farmer, sow’d his Field,
Chear’d with the Hope of future Gain ’twould yield,
Two upstart Jacks in Office, proud and vain,
Come riding by, and thus insult the Swain.
You drudge, and sweat, and labour here, Old Boy,
But we the Fruit of your hard Toil enjoy.
Belike you may, quoth Hodge, and but your Due,
For, Gentlemen, ’tis HEMP I’m sowing now."

Which may have meant that Hodge would also enjoy the fruits of his labor because it was smokeable hemp, but more probably just meant it was a profitable industrial crop. Our Founding Fathers were much concerned with the profitability of the hemp crop, grown mainly for fiber.

Franklin also wrote in 1739:
"Hemp will grow faster than the Children of this Age, and some will find there’s but too much on’t."

Peter Collinson (1694–1768), who "was one of the most important persons" in Franklin's life, was an English horticulturalist who "urged his American correspondents to cultivate flax, hemp, silk, and grapes."

There’s an early hemp processing machine idea in a 1763 letter to Franklin from Alexander Small. But as late as 1837, both the US and the UK were relying on slaves to do the back-breaking work of processing hemp, as in this 1837 UK cartoon, wherein slaves lament, "Beating this here hemp is worser than breaking stones. Lord ha’ mercy on us poor."

Under the UK's New Poor Laws, paupers were required to work from 4 in the morning until 10 at night, and ironically could be told to “go to the hemp” (be hanged, though not around the neck).

Oliver Twist was also published in 1837. In it, one of Oliver’s jobs is to pick hemp oakum.

A Tokin' Woman Goes to Jamaica and DC

The first High Times Jamaican World Cannabis Cup was well worth attending (and I was lucky enough to do so).

Held at a park right on the beach steps away from the swanky Sandals/Beaches complex in Negril, the event featured exhibitor booths under canopies, which worked against the afternoon rains that came nearly every day. On sunny Saturday, attendance hit its peak with people from Kingston and other parts of the island in attendance, as well as folks from all over the US, Central America and Europe.

NORML had a booth and was able to re-invigorate its Jamaica chapter at the event, with NORML founder Keith Stroup and Jamaica NORML founder Paul Chang attending, and new volunteers Linda Jackson, Linda Browne and Sharifah wo-maning the booth where many attendees signed up to stay in touch.

The event came as Jamaica has legalized possession of two ounces of ganja for all, as well as a religious exception for Rastafaris, and is expected to issue regulations for sales. It was held under the religious exemption as a Rasta Rootzfest, and Jamaican Minister of Justice Marc Golding, who has been a proponent of religious freedom, spoke at the opening ceremonies.

People were walking around the event with sticks of herb in their back pockets, or in baskets, obviously for sale. On the second day, signs appeared on the booths saying, “No Token, No Herb.” The idea was to purchase tokens in the manner of drink tickets from an official booth, in denominations of $5, $10, or $20 and exchange these for herb at a booth in the section that sold Ital foods. No alcohol except for Ethiopian wine was sold at the event, and a mellow time was had by all.

I brought promotional copies of my new book Tokin’ Women: A 4000-Year Herstory and was interviewed on IrieFM  by famed DJ Mutabaruka, who informed me that the Rastas sing about the Queen of Sheba bringing ganja to Solomon, a conclusion I also reached. I also got to meet Charlo Greene, the Alaska newscaster who famously quit on the air in order to work for marijuana legalization in her state. We’ve been in touch, and I plan to add her to the final first edition of Tokin’ Women.

At night the program was filled with the sounds of The Mighty Diamonds, Tarrus and more, and during the day, a high-level program was held with Jamaican government officials talking about the future of ganja laws. High Times cultivation editor Kyle Kushman, who got married at 4:20 on Thursday at the event, was rhapsodic about the possibilities of bringing more modern agricultural techniques to the island, known for its ganja tourism.

The winners of the World High Times Cup were mostly from the US and Amsterdam, with the Jamaican Cup winners from Orange Hill in Westmoreland, and the St. Bess /Elizabeth and St. Ann regions.

Charles Nesson, an attorney and professor from Harvard Law School, was also presented with an award. Nesson defended Daniel Ellsberg in the Pentagon Papers case, brought suit on NORML’s behalf in Massachusetts, and told Salon he is “interested in advancing Justice in Jamaica…as well as national drug policy.” Nesson called Jamaica a testing ground for regulation in California, because of its large community of outlaw growers.

At the Drug Policy Alliance conference in Washington, DC immediately following the cup, doctoral student Vicki Hanson from the University of West Indies in Kingston spoke on a panel titled, “Ensuring Inclusion, Repairing Damage: Diversity, Equity and the Marijuana Industry” about the need for land reform for farmers in a nation where much of the ganja comes from guerilla grows on public lands. Hanson was chosen to speak at the closing plenary at the conference, which hosted 1500 attendees from 71 countries. DPA's Ethan Nadelmann said we must remember “the farmers and peasants the world over who have lost their livelihood because the plant they were growing was deemed illegal….and we must hold accountable some of those people who justified and allowed those policies to stay in place.”

Big ups to all who put these great events together and hope to see you all in Jamaica next year, and in Atlanta in 2017 for the next DPA conference.