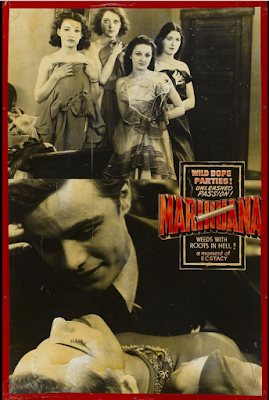 TCM is airing marijuana propaganda films in the early morning on Saturday/Sunday, July 16/17. Along with the well-known Reefer Madness (1936) is another film from that year, Marihuana. It stars fresh-faced Harley Wood as Burma, a teenager who feels neglected because her mother dotes on her older sister. ("All I hear is Elaine, Elaine, Elaine," she yells in a Jan Brady moment.)

Burma goes bad when she gets turned on to weed after the stereotypical older gangster guy invites her and her friends to a party at his beach house. "We tried Tony's giggle water, let's try his giggle weed," they figure, and the party gets racy, with the girls disrobing and skinny dipping in the ocean, squealing all the way. They pay dearly for their fun when one of the girls drowns and Burma gets knocked up.

To earn money so that he can marry her, Burma's boyfriend smuggles dope for the nasty Nick and is killed by the police. Nick helps Burma with her problems while plying her with champagne and turning her into a marijuana peddler who also pushes "C" and "H." Interspersed with headlines like "Wave of Brutal Crime Laid to Marijuana Smoking," the now-corrupt Burma is shown gleefully adorning herself with furs and jewelry. At one point she takes a woman's engagement ring in exchange for a package of heroin, and then concocts a scheme to kidnap her sister's child for ransom. In a plot twist, her past comes crashing down on her in an almost poetic way, a bit unlike the campy, heavy-handed Reefer Madness or She Shoulda Said No—the 1949 film starring Lila Leeds, the actress who'd been arrested for marijuana with Robert Mitchum.

According to IMDB, the script for Marihuana was written by Hildegarde Stadie, who, "despite her wholesome appearance, led a colorful, bizarre and unpredictable life. She was the niece of a patent medicine peddler, and as a little girl, she traveled with him all over the United States, selling their cure-all, Tiger Fat. Part of the presentation involved a pre-teen Hildegarde, appearing fully nude, with a python draped around her shoulders. Though she did not draw upon this particular anecdote, her experience with her uncle greatly influenced her script for Narcotic (1933)."

Stadie and her "notorious exploitation filmmaker" husband Dwain Esper distributed "Reefer Madness" and they made films that "remain so bizarre and prurient that it is hard to imagine a husband and wife with two children producing them." Stadie was 98 when she died in 1993.

Wood went on become a songwriter as Jill Jackson Miller with her husband Sy Miller, penning songs like "Keep in Touch With Your Heavenly Father" and the popular "Let There Be Peace on Earth (and Let It Begin With Me").

Also showing on TCM are two short films, "The Terrible Truth" (1951), wherein "a juvenile court judge investigates the tragedy of marijuana addiction," and "Keep Off the Grass" (1969), an educational film in which "the dangers of marijuana are outlined."

June Eckstine: Lady With a Pipe? 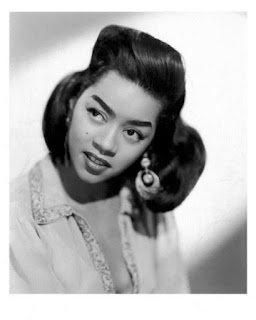 When I was last in my hometown of Pittsburgh, on my way to meet the fabulous Theresa Nightingale of Pittsburgh NORML, I happened upon a State Historical Marker commemorating the birthplace of jazz great Billy Eckstine. Looking him up, I may have found another Tokin' Woman, or just a woman who was repeatedly harassed over marijuana: his first wife June.

Billy Eckstine won a talent contest by imitating Cab Calloway (he of "Reefer Man" fame), and became a popular and accomplished singer. In 1944 he formed his own big band, which "became the finishing school for adventurous young musicians who would shape the future of jazz." (Wikipedia) Included in this group were Dizzy Gillespie, Dexter Gordon, Miles Davis, Art Blakey, Charley Parker and Tokin' Woman Sarah Vaughan. Davis claimed in his autobiography that Eckstine supplied the band with cocaine.

Eckstine was a snappy dresser who later had a clothing line, and a bevy of female admirers dubbed "Billysoxers." He and June were married in 1942. She sang with the band and was described as "glamorous" and "sultry." The couple were frequently photographed together for lifestyle pieces. 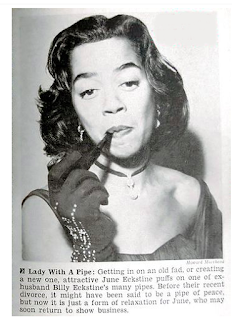 According to the book Mr. B: The Music and Life of Billy Eckstine by Cary Ginell, both Billy and June had run-ins with the law over marijuana in 1947, just after the band had an altercation with a racist audience member (for which Frank Sinatra wrote Eckstine a note of congratulations). Billy was at a party with a Honolulu-born dancer named Louise Luise at the apartment of "Chicago playboy" Jimmy Holmes when the place was raided. Holmes had 183 "reefer cigarettes" and Eckstine was caught with a .45-caliber revolver. The headlines read, "Maestro-Crooner Arrested with Pretty Sweetheart in 'Weed' Den." Eckstine's lawyer claimed his client had found the gun in a wastebasket and that he was unaware of the marijuana. His charges were quickly dropped.

June "was the target of the more salacious accusation of sodomy" at a "weed party" in Ardmore, Pennsylvania later that year, Ginell's book claims, putting her age at 25 at the time. An 18-year-old girl from Bryn Mawr reportedly said June "persuaded her to ingest marijuana and then raped her." June vehemently denied both accusations, claiming she'd been framed. A grand jury cleared her of the charges and the case never went to trial, but not before headlines screamed that June had been arrested for "dope and unnatural acts."

In March of that same year, Tokin' Woman Anita O'Day was arrested for pot after two undercover policeman came to her home during a party at which Gillespie was playing from the branches of a tree in their front yard. 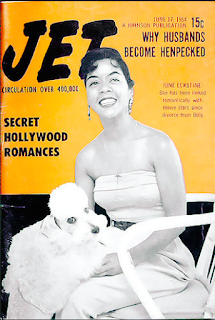 June was photographed smoking one of Billy's pipes shortly after they divorced in 1952 (above), and targeted soon afterwards for a second marijuana arrest:"Singer June Eckstine, the attractive 27-year-old former wife of crooner Billy Eckstine, was arrested in her plush Hollywood apartment with three white friends and booked on a charge of possession of narcotics," said  a Jet magazine item on July 29, 1954. Charges were later dismissed against June for insufficient evidence, but Roberta Kahl, described as "a 34-year-old blonde model" who had a joint in her purse on June's bedside table, was held for trial.

June had a small speaking role in the  movie "Carmen Jones" with Dorothy Dandridge and Harry Belafonte in 1954. She later became a successful realtor in Los Angeles, finding homes for the likes of Lou Rawls, Muhammad Ali, and Sammy Davis, Jr. and dating people like John Garfield.
Posted by Tokin Woman at 12:09 AM No comments: