Martha Stewart On Rolling a Joint with Andy Cohen 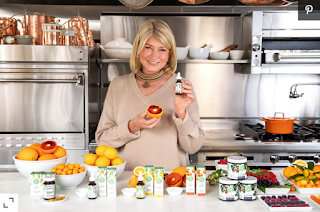 
Huffington Post reports that Martha Stewart, the woman who does everything perfectly, also knows how to roll a joint. Or so she said in an interview with Andy Cohen, where she also said she almost asked for a puff off a sloppily rolled one she'd seen on the way to the studio. "That would have made for a very interesting interview," quickly quipped Cohen. Perhaps Stewart ought to demonstrate her joint-rolling skills in an upcoming show, as Canadian historian Pierre Berton did in 2010.

It seems Stewart had her eyes opened to the injustices of the drug war when she took a prison rap for the true stock manipulators who bankrupted our country. In her 2005 holiday message from prison, Stewart wrote, "I beseech you all. . . to encourage the American people to ask for reforms, both in sentencing guidelines, in length of incarceration for nonviolent first-time offenders, and for those involved in drug-taking."

In April 2013, Stewart said on The Today Show that she and Snoop hang out and bake brownies together. It's true: Stewart and the artist formerly known as Snoop Dogg baked brownies and rapped together about the green kind on her show in 2009. "Why not bake 'em at 4 hundred and 20 degrees?" asked Snoop. In 2017, the Martha Stewart and Snoop Dog: T-Mobile Super Bowl Ad won a Tokey Award for Best Commercial.

In 2014, Stewart offered free patterns for craft projects made with her hemp/cotton yarn line. She commented upon the September 2020 release of her CBD edibles line: "I've found that CBD supplements are a simple way to enhance my own health and wellness, especially when it comes to managing the stresses of daily life. I set out to create the most delicious CBD products on the market, drawing inspiration from some of my favorite recipes and flavor profiles from my greenhouse and gardens.

"My wellness gummies closely resemble the French confections, pâte de fruits, rather than the sticky, overly sweet versions you might find elsewhere. Created in collaboration with top researchers and scientists at Canopy Growth, I am very proud of the end result: wellness gummies, oil drops, and soft gels that taste as wonderful as they make you feel."

Fashion News, plus More on Miley, the Kennedys and Rolling Stone

This may be something new for the 39-year-old "America's Next Top Model" host, who told Jimmy Kimmell in 2011, "I'm just flying on a nature high!"

Perhaps marijuana use is why Banks is so much nicer than fellow model Naomi Campbell, who pleaded guilty in 2007 to throwing a cellphone at her former maid. Marijuana ought to be mandatory for Campbell.

In other fashion news, skier Lindsey Vonn (below) was pulled off the red carpet at the Fashion Awards event in New York City on June 5 by the US Anti-Doping Agency. Vonn, who is training for the 2014 Winter Olympics, was taken to the bathroom by USADA officials who demanded a urine sample on the spot.

Meanwhile, Miley Cyrus calls alcohol "way more dangerous than marijuana" in an upcoming issue of Rolling Stone. A new edition of Marijuana is SAFER: So Why Are We Driving People To Drink? ought to spark more of a debate on that topic, as should a recently published German paper about alcohol use by young people and its effect on later drinking.

Melissa Etheridge penned a June 4 opinion piece for CNN that had these wise words:

These days our society is experiencing a new open-mindedness. We are beginning to break away from the old fears that governed our parents' world. We do not automatically fear someone because of the color of his or her skin. We do not fear for our children if homosexuals are living in the neighborhood. And we do not fear that smoking pot will necessarily lead to a life of ruin.

I believe it is time to shine a light on the old "Reefer Madness" fears. Let's legitimize cannabis sales so that our youth are as protected from illegal pot as they are from illegal alcohol and tobacco sales. Legitimize the growers so that pot can have regulations and I know I am supporting American businesses and not outlaws when I purchase it.

Finally, Caroline Kennedy sat on a jury that acquitted a man charged with selling crack to an undercover officer and Bill Maher took on Patrick Kennedy for being untrue to the Kennedy legacy.

P.S. Don't miss the Rolling Stone "Weed" issue, on the stands now (though I haven't seen any contributions by or about women, except for "The Hollywood Princess Who Keeps Snoop Blazed."

For the latest news, follow our Twitter feed, @tokinwoman
Posted by Tokin Woman at 1:06 PM No comments: