The film was written and directed by Paul Mazursky (who also wrote 1968's I Love You Alice B. Toklas, in which pot brownies are imbibed). It begins with married couple Bob (Robert Stack) and Carol (Natalie Wood) participating in an encounter group, based on Mazursky's experiences at the Esalen Institute in Big Sur, CA.

Having opened up to new experiences, Bob has a fling with a colleague on a business trip, and confesses his infidelity to Carol. She is surprisingly accepting of Bob's experimentation, and soon tries some of her own.

The couple's experiments include smoking pot with their friends, another married couple Ted (Elliot Gould) and Alice (Dyan Cannon). Wood as Carol daintily takes a few little hits, after filling the pipe and lighting it for her husband.

She then pronounces herself "totally and completely zonked out of my skull" but doesn't really act like it, except for amusing herself by talking about doing things "groovily and peacefully."

Cannon, despite her character's name being Alice (as in Wonderland or B. Toklas), insists that she "never gets high," while puffing and coughing away. Her revelation is that she's too fearful of "getting into a potful of trouble," especially because Bob & Ted are lawyers. Ted tells her he loves her anyway, calling her "my sweet unstoned mother of my only son."

Read more »
Posted by Tokin Woman at 3:30 PM No comments: 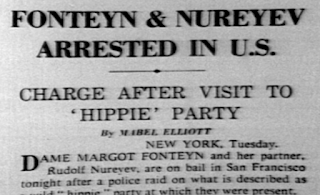 Read more »
Posted by Tokin Woman at 8:47 PM No comments:

RIP To the Marvelous Doris Day

RIP to Doris Day, a wonderful singer, dancer and actress who was hipper than most knew: Groucho Marx once joked, "I'm so old I knew Doris Day before she was a virgin." Bob Hope's nickname for her was "jigglebutt."

Day was too marvelous for words in films like Man with a Horn, The Pajama Game, and It Happened to Jane, where she fights for her rights in a small New England town. As part of her well marketed wholesome image, Day plays a character shocked by marijuana in Lover Come Back (1961), one of several films she made with Rock Hudson.

Advertising executives Carol Templeton (Doris) and Jerry Webster (Rock) work for competing ad agencies. Angered by Jerry’s method of nabbing clients using alcohol and women, Carol brings his behavior up before the Advertising Council. But Jerry bribes Carol’s star witness by filming her in a TV commercial for an imaginary product named VIP. When the ads are accidentally broadcast, Jerry pays a scientist to invent something he can call VIP. Meanwhile, Carol goes after the VIP account and mistakes Jerry, whom she has never met, for the scientist. Rock goes along, pretending to be an inexperienced and marriageable academic instead of the rogue his character truly is, a ruse that was a good cover for Hudson’s homosexuality.

When Carol shows up at Webster’s apartment to confront him she is surprised when Jerry, who she thinks is the scientist, opens the door. Jerry feigns confusion, implying he was partying with the dastardly Webster the night before and his memory is fuzzy. 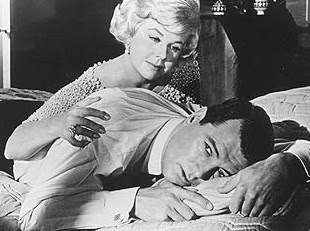 Rock: “I was dizzy after that cigarette he gave me.”

Doris: “Oh, that depraved monster! What kind of cigarette?”

"Wine Country," now in theaters and on Netflix, is directed by Amy Poehler, who co-stars as the insecure control freak Abby on a weekend getaway with gal pals played by fellow SNLers Rachel Dratch, Maya Rudolph, Ana Gasteyer, Paula Pell and Emily Spivey.


Of course throughout the movie the characters compulsively slurp wine, our socially acceptable but not very interesting inebriant. The group talks about microdosing Molly, but doesn't do it, mainly because they don't know how it will react with all the prescription drugs they're taking, including Wellbutrin, Xanax, Zoloft, and "WhoYaGonnaCallTrex."  Zoloft, being a Selective Serotonin Reuptake Inhibitor (SSRI) arguably already works as a microdose of psychedelics, since those substances flood the brain's serotonin receptors. Usually people taking SSRIs don’t feel the affect of psychedelics.

"Apparently we're just not that interested in doing drugs," Abby announces, to which Spivey's character astutely responds, "Except for the thousands of drugs we just listed." Instead, the 50-year-old birthday girl Rebecca (Dratch) lays on the floor all night in back pain to have her needed revelation (which sounds a lot less pleasant than taking a little MDMA).

"Toking" is also only mentioned, as a means of coping alongside soaking in a tub, by an amusingly butchy character played by Tina Fey. Then the script makes her a cokehead. Poehler recently pronounced herself unproductive on pot and had a bad time the day after she tried Molly (she wasn't asked about wine). Maybe someday like Chelsea Handler she'll figure out that cannabis can enhance creativity, and it's safer than alcohol. SNL was certainly funnier when its writers and actors smoked weed.

Chelsea Handler, whose new book Life Will Be the Death of Me debuted as the #1 New York Times bestseller last month, appeared yesterday at The Hall of Flowers, a "B2B Premium Cannabis Trade Show" in Santa Rosa, California.

To the first question, "What is your relationship with cannabis?" Handler replied unequivocally, "It's strong." Saying that she tried marijuana a few times in high school but got "too stoned" and paranoid, she thought, "Why don't I just stick with alcohol?"

But in her new book she relates how after the Trump election she found that her rage at the political situation was overly exacerbated by alcohol, and so she began learning more about marijuana as a substitute, starting as an aid to meditation. "It's changed my life," she announced. "It's cut my drinking in half, which is a sentence I never thought I'd say."