Amazing Grace Jones Caught on Film in "Bloodlight and Bami" 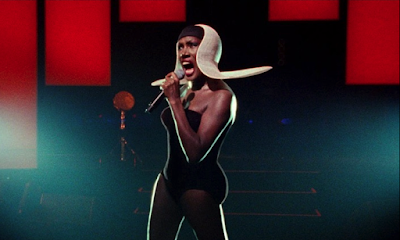 Grace Jones: Bloodlight and Bami, currently in theaters and on Amazon Prime, captures the extraordinary artist that Jones is. No staid talking head-style documentary, this film is a visual statement worthy of its inspiration.

Filmmaker Sophie Finnes followed Jones for a decade, to Jamaica visiting family, on tour in Paris and New York, and to the recording studio for her 2008 album Hurricane. Concert footage of Jones's always-remarkable performances illuminate her story, particularly her poignant autobiographical lyrics.

Read more »
Posted by Tokin Woman at 8:53 PM No comments: 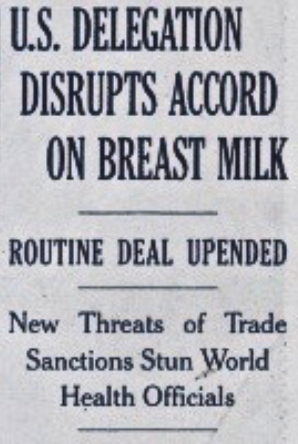 A front-page New York Times exposé by Andrew Jacobs reveals that the US used thuggish tactics in an attempt to derail an international resolution supporting breast feeding in Geneva this spring, no doubt at the behest of infant formula manufacturers.

"A resolution to encourage breast-feeding was expected to be approved quickly and easily by the hundreds of government delegates who gathered this spring in Geneva for the United Nations-affiliated World Health Assembly," the article begins. "Based on decades of research, the resolution says that mother’s milk is healthiest for children and countries should strive to limit the inaccurate or misleading marketing of breast milk substitutes."

"Then the United States delegation, embracing the interests of infant formula manufacturers, upended the deliberations. American officials sought to water down the resolution by removing language that called on governments to 'protect, promote and support breast-feeding' and another passage that called on policymakers to restrict the promotion of food products that many experts say can have deleterious effects on young children. 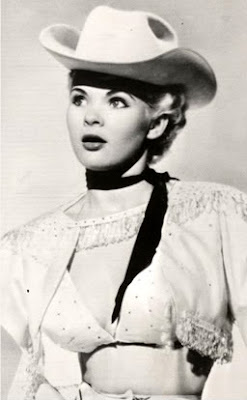 Barr tried stage acting, but her legitimate career was derailed in 1957, when she was arrested for having a little less than four-fifths of an ounce of marijuana concealed in her bra. She maintained that she was framed by police and was only holding the pot for a friend, possibly an informant.

"We think we can convince a jury that a woman with her reputation, a woman who has done the things she has done, should go to prison," Assistant Dallas County District Attorney Bill Alexander told the Dallas Morning News after Barr's arrest. "She may be cute," Alexander told the jury in his closing argument, "but under the evidence, she's soiled and dirty."

Barr was convicted and sentenced to 15 years in prison. "I always wanted a brick house of my own, and it looks like I am going to have one," she told an assembled crowd and news media when she walked into Goree Farm for Women in Huntsville, Texas, in December 1959.

Read more »
Posted by Tokin Woman at 4:37 PM No comments:

New Archeological Finds Point to Ancient Cannabis Use, Despite Prejudice of Some Scholars

“For as long as there has been civilization, there have been mind-altering drugs,” begins an article in the 4/20/18(!) edition of Science magazine.

Alcohol was fermented at least 10,000 years ago in the Fertile Crescent, the article continues, and psychoactive drugs “were an important part of culture. But the Near East had seemed curiously drug-free—until recently. Now, new techniques for analyzing residues in excavated jars and identifying tiny amounts of plant material suggest that ancient Near Easterners indulged in a range of psychoactive substances."

Australian archeologist David Collard, who has found signs of ritual opium use on Cyprus dating back more than 3000 years, was interviewed for the article, and said that some senior researchers consider the topic “unworthy of scholarly attention.” He told Science, “The archeology of the ancient Near East is traditionally conservative.”

The Yamnaya people, who traveled from Central Asia around 3000 BCE “and left their genes in most living Europeans and South Asians,” appear to have carried cannabis, which originates in East and Central Asia, to Europe and the Middle East.” They also brought with them the wheel and possibly Indo-European languages.

The Yamnaya were part of the "corded ware culture," so named because of the cord patterns in their pottery, and possibly pointing to the use of hemp for rope.

In 2016, a team from the German Archeological Institute and the Free University, both in Berlin, found residues and botanical remains of cannabis at Yamnaya sites across Eurasia. Digs in the Caucasus have uncovered braziers containing seeds and charred remains of cannabis dating to about 3000 BCE.

Read more »
Posted by Tokin Woman at 8:32 AM No comments: