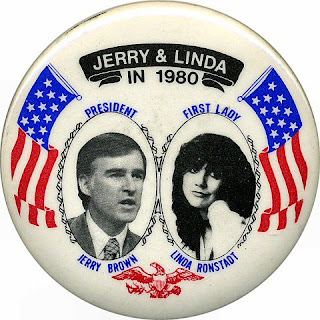 Once more, as he had in 2014, California Governor Jerry Brown has insulted (and then kinda praised) potheads, this time in a Rolling Stone interview, where he said when asked about California's new law legalizing marijuana:

"It's a bold experiment! We don't know how many people will be stoned, how long. Is it going to reduce the influence of criminals and cartels? Or is it going to lead to just another - you know: There they go! [Droops his head back on the couch, pretends to be a stoner.] 'Well, I'm gonna have another joint; don't worry about climate change.' [Makes huge inhaling noise as he pantomimes smoking a doobie.] 'It's all great…'

Brown continued, "[Colorado Gov. John] Hickenlooper says it's working pretty good. He has more experience. I would say the devotion and the zeal of the marijuana people is extraordinary. And far exceeds the mainline church community's, as I encounter it."

Is this more distancing by Brown from his "Governor Moonbeam" image? As Jessica Mitford recorded in a letter on April 23, 1992, SF Chronicle columnist Herb Caen joked that while Bill Clinton claimed he didn't inhale, Jerry Brown had never exhaled. Johnny Carson repeated the joke. 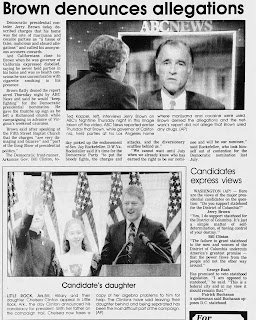 In 1992, I had just learned about the hemp/marijuana connection, from a guy who'd taken me to a Brown for President campaign event for our first date. Inspired by Jerry's reason and passion, I decided to delve back into politics, both as a hemp activist (mainly for environmental reasons) and as a volunteer for Brown's presidential campaign. Far from being a lazy so-and-so who didn't care about important issues, I was working around the clock: at my paying job, as well as on my two nonpaying political causes.
Brown's campaign was going well, until suddenly on April 9 the lead story on the ABC Evening News showed two different men with their faces and voices obscured alleging that marijuana (and cocaine) were used in The Governor's Mansion while Brown was in office and dating Linda Ronstadt. (An accusation which made little sense since Brown famously didn't live in the Mansion, preferring a more modest dwelling. After all, he had worked with Mother Teresa in Calcutta.)

My fellow hemp/Brown activists and I tried advising his staff that he ought to make light of the accusations, but instead he issued a blistering response, calling them "false, malicious and absurd" and "part of the Gong Show of presidential politics."

He'd allowed himself to be put on the defensive, and never recovered. Clinton emerged as the front runner, and Brown had to reinvent his career, first as Mayor of Oakland and California Attorney General before being reelected as Governor. 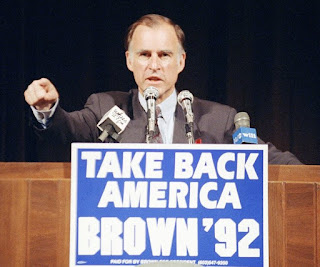 Does Brown blame marijuana for the demise of his 1992 campaign? At least he now acknowledges that cannabis activists are a committed bunch, although he thinks we're too stoned all the time to care about important issues like global warming. I've been a cannabis activist ever since and would like nothing better than for its persecution to end so that I could work on other causes, like voting rights or environmental issues.

I'd warrant that marijuana smokers are in general more aware and active in greater causes than are, say, beer or wine enthusiasts. In fact a booklet published for parents in 1998 by the Salt Lake Education Foundation, featuring a forward by Utah Senator Orrin Hatch, included "excessive preoccupation with social causes, race relations, environmental issues, etc." as a warning sign of marijuana use. Interestingly enough, Hatch has now introduced a sweeping medical marijuana research bill.

To his credit, Brown signed the bill to decriminalize marijuana in California in 1975 during his first term. Recently, he signed a bill legalizing hemp farming in California (but only after it was amended to only make it legal once the feds did). He also approved a bill ending the practice of kicking medical marijuana patients off organ transplant lists in 2015. But in California, people can still lose their jobs for using marijuana, even with a doctor's recommendation, and cannabis-using patients are routinely kicked off their prescription medications, forced instead onto more dangerous opiate drugs. [These last two changed years years after Brown's RS interview, in bills signed by Gov. Gavin Newsom.]

Update 6/18: Journalist Sy Hersch recalls smoking pot with Eugene McCarthy and Brown in 1968. “The stuff did little for McCarthy, so he said, but it did much more for Brown,” Mr. Hersh writes. Again, Brown denies.

UPDATE 10/10/17: Kathy Bates, promoting her Netflix series "Disjointed" on The Late Show with Stephen Colbert, described smoking some of Bill Maher's too-strong pot at a birthday party for Marshall. No word on whether or not Marshall smoked it too.

After appearing in musical theatre in her youth, Marshall decided to move to Los Angeles with some fellow cast members. She writes:

"On the night before we left,  Bill, Randy, and I went to the drive-in and saw The Trip, director Roger Corman's movie abut a TV director who takes LSD and goes on a mind-bending journey. Bill lit up a joint, and I smoked pot for the first time. It didn't even make me hungry."

Marshall says she liked Reiner because he "wore pajamas and didn't do drugs. His wild days were behind him." But after they married, "our house becomes a hangout for comedy's elite," naming Albert Brooks, Jerry Belson, Billy Crystal, Richard Dreyfuss, and Charles Grodin, among others.

"These were the pot-smoking years, and a lot of it was smoked at our house," she writes. "I cleaned the seeds and stems in a shoebox top. It was a skill, and I was good at it." Women weren't invited into the club. Belson would interrupt Brooks's comedy routines to say, "Can we take a break and smoke a joint?" and Brooks would get the munchies so badly he would eat Marshall's daughter's brown bag lunch meant for school the next day.

She mentions smoking cigarettes frequently, a habit she started while still in junior high. While working with Steven Speilberg, "I tried to get a Quaalude in him. They were my drug of choice. I constantly joked about wanting to know what he would be like if he relaxed."

Once, she flushed a bag of heroin down the toilet when her friend John Belushi offered it to her. "I had tried heroin once. It made me carsick," she wrote. "Artie [Garfunkel] didn't like it either, thank God. When others were chipping on the weekends, he was my ally in not doing it, and I will always be grateful to him for giving me the wherewithal to keep saying no. I wish John had done the same." 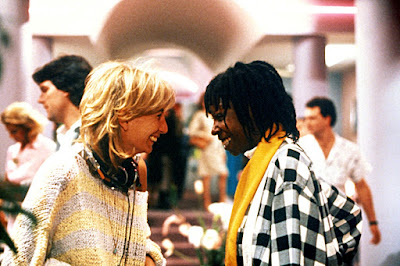 Marshall hit the bigtime in TV's "Laverne and Shirley" (1976-1983), which has a "lost episode" from 1981 titled "I Do, I Do" in which the girls get stoned on pot brownies. She later became one of the most successful female film directors ever, starting with directing Whoopi Goldberg (pictured) in Jumpin' Jack Flash (1986), followed by Big with Tom Hanks, and Oliver Sacks's Awakenings with Robin Williams and Robert DeNiro. I thought it was brilliant that for Big she had the actor who played Hanks's younger self act out all the scenes so that Hanks could see what a boy looked like in them; it was also interesting to learn that DeNiro almost played his role.

I particularly enjoyed her description of directing A League of Their Own, the first women's baseball movie. She tells how she cast and re-cast the film, getting Madonna to try out on the baseball field, and standing her ground to keep the ending with the "old women" of the All-American Girls Professional Baseball League, for whom she says she made the movie. League was selected for preservation in the National Film Registry by the Library of Congress in 2012. The film celebrated its 25th anniversary on July 1 (with a new Blu-ray edition).

After surviving lung cancer that metastasized to her brain, Marshall gained weight and turned to her friend Carrie Fisher, then a spokeswoman for Jenny Craig. "Thirty years earlier we had dropped acid," she writes. "Now we were microwaving our Jenny meals. What had we become?"

Up next from Marshall: Between the Pipes, the story of Manon Rhéaume, the only woman to play for the NHL, and the story of Dennis Rodman, due out in 2018.
Posted by Tokin Woman at 9:30 PM No comments:

I must say I'm conflicted over whether or not to mourn Hugh Hefner's death.

As a feminist, I can't say he was a hero of mine. I read Gloria Steinem's undercover description of what it was like to be a Playboy Bunny, and it wasn't pretty. On the other hand, he supported a woman's right to choose.

Hefner stood up for the First Amendment in more ways than the obvious one: publishing an interview with Malcom X lead to his first obscenity trial. He also helped get NORML (the National Organization for the Reform of Marijuana Laws) off the ground with a donation and editorial support, and later held fundraisers for the Marijuana Policy Project at the Playboy mansion (hostessed in 2009 by Adrianne Curry and Fairuza Balk).

It was also in Playboy where former Surgeon General Jocelyn Elders commented about then-Health and Human Secretary Donna Shalala's indefensible stance against medical marijuana, saying, "She has a Ph.D. in political science. That's the kind of science she practices." Bill Gates outed himself as an LSD user in Playboy, and Rush Limbaugh told the magazine in 1993 he smoked pot only twice in his life and it made him nauseous. (Others dispute the claim.)

I recently viewed the Amazon biopic series on Hefner, produced by Playboy Enterprises. It surprised me by revealing that his first girlfriend cheated on him with another man, devastating him and causing him to question monogamy. (So he acted as Shahryar did?) Episode 6 addresses Playboy's commitment to civil liberties, heightened by the hiring of editor Arthur Kretchmer, who's interviewed recalling, "Some of us were smoking dope." (Meanwhile, Hef was downing prescription Dexedrine to keep up with his grueling schedule.) 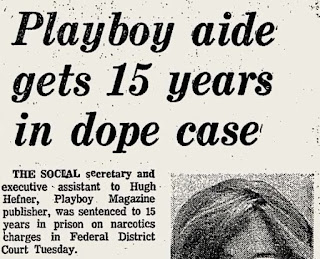 Episode 8 details the unjust drug arrest of Hef's close friend and associate Bobbie Arnstein, who committed suicide after receiving a 15-year prison sentence. Hefner was in tears when he read a statement condemning the US Government for hounding Bobbie to death. But it's also thought that she was troubled over an inferiority complex heightened by constant comparison with the Bunny Brigade.

Of course Hefner owed his success to the women who willingly graced the pages of Playboy over the years. The Marilyn Monroe estate's Twitter feed reminded us that she helped launch Playboy, by appearing on its first cover. Inside was that classic, exuberant nude of her, taken years earlier and purchased by Hef from a calendar publisher for $800.

The early centerfolds were quite beautiful, I thought, but I can't look at them today: each one has the same, unnatural body (no hips and oversized boobs; worse, little or no pubic hair). The biopic also reveals how competition from other girlie magazines forced Playboy into rancher realms.
UPDATE 2/22: A new series on Playboy on A&E also covers the Bobbie Arnstein case and interviews NORML founder Keith Stroup.

Posted by Tokin Woman at 8:04 PM No comments: