Having graduated from Penn State (now derisively called State Penn) in 1980, I chimed in on a listserve with several dozen of my sorority sisters from the 70s, who still get together for Homecoming games.

Rather than address the fundamental issues at hand, the messages were all about damage control. Almost immediately after the news hit, one woman, who works in public relations at another University, suggested all give donations to anti-child-abuse organizations in the name of Penn State. Another posted a story about current matriculates from our chapter handing out blue ribbons, the color of child abuse victims and one of PSU’s colors, before the game. One alum sent flowers to the chapter.

My pleas to reevaluate our nation’s fixation with seeing a piece of pigskin move down a patch of land fell on deaf ears. I wrote in that every time I tell people I went to Penn State, all they want to hear about is the football team and Paterno. Is that all an educational institution is supposed to be about? I asked. Is the welfare of children really secondary to who wins the game?

I brought up Noam Chomsky’s book “Manufacturing Consent," theorizing that the elites in society need to have their consent manufactured for government policies, but the vast majority just need to get distracted. Sports, which doubles as "an exercise in radical jingoism," is one of the distractions. But everyone watched the game anyway. Rah.

A week later, Paterno’s son leaked the news that his father had a treatable form of lung cancer. This prompted my sisters to suggest we all write letters of support to our “Italian grandfather.” Missed was the news that Pennsylvania Rep. Louise Williams Bishop (pictured) had just introduced a bill requiring anyone with knowledge of a sex crime against children to report it to the police, not just a supervisor.

In a press conference announcing the bill, Bishop outed herself as a childhood sexual abuse victim. Inspired by her courage, I did the same on the listserve. Like the victims Bishop spoke of in her announcement, I too have struggled with earning a living, and while reconciling my past, I missed out on marriage and family too.

Just like the Catholic church scandal, to me what was worse than the abuse itself was the fact that those in positions of authority allowed it to continue, increasing the victim count. The beloved Paterno is almost certainly guilty of this.

I asked my sisters to think on this quote by Arthur Rimbaud: "He who is legend in his own time is ruled by that legend. It may begin in absolute innocence. But, to cover up flaws and maintain the myth of Divine power, one has to call on desperate measures."

How many innocents had their lives ruined by Paterno's desperate measures? I asked. How many in the Catholic church? And how many women propped up these pathetic patriarchal institutions, and continue to do so? Why? Because we think a Santa Claus/Yahweh/father figure will save us from our own mortality? By winning a football game?

I volunteered at a rape crisis center as part of my healing, and the calls were very often from those who were just starting to deal with abuse they had suffered as children. It can scar a life. I asked my sisters to write their letters of support to their elected representatives in support of Bishop's bill, which has been opposed by the Catholic church.

I am, as Al Green sings, “blessed in the service of my savior”: the plant teachers who opened my mind to a childhood memory I had suppressed in my subconscious mind. Maybe if my sisters weren’t drinking their brains out at football games every week and were instead using something more enlightening for recreation, they would understand. Marijuana is Safer.
Posted by Tokin Woman at 1:15 PM No comments: 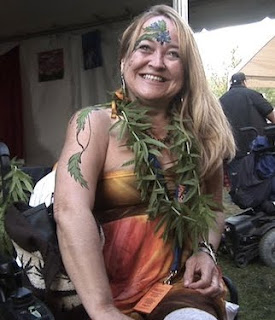 I got to see the documentary "A NORML Life" at a NORML Women's Alliance event in San Francisco last night. It's a terrific film that should be widely seen by reformers and others.

Rod Pitman, the film's director, was working on a movie about The Doors when he attended a 2008 NORML conference in Berkeley at which Doors keyboardist Ray Manzarek spoke. The film has some fine snippets of Manzarek extolling the consciousness-expanding properties of pot, and the DVD contains a bonus interview with Manzerek.

Canadian activist Jodie Emery, whose husband Marc is serving time in a US federal prison for selling marijuana seeds over the internet, is one of the interviewees. In her poignant segment, Emery points out that Marc's actions were aimed at bringing back homegrown marijuana instead of cartel-grown.

Elvy Musikka, one of four federal patients who receives marijuana from the US government, is also powerful in her interview, as is her driver "Big Mike" and the little-but-mighty Ohio activist Tonya Davis (pictured).

In the film, Sabrina Fendrick describes how the new NORML Women's Alliance sprang from an article titled "Stiletto Stoners" in Marie Claire. NORML director Allen St. Pierre explains well the organization's challenge: end prohibition while still offering assistance to its victims. He likened it to trying to build a boat while already in the water.

California Drs. Frank Lucido and Christine Paoletti did a fine job explaining the scientific basis for marijuana's medical uses, and Kentuckian Gatewood Galbraith got some of the biggest laughs with his cogent analyses. Other "high" lights include musician Tim Pate, "Toke of the Town" journalist Steve Elliott and CalNORML Attorney Bill Panzer.

The film ends with a message from NORML founder Keith Stroup about folks coming "out" as pot smokers, and working with their elected officials to lift federal prohibition, allowing states to make their own laws, just as happened with alcohol.

The DVD is available at Amazon.com and the distributor Cinema Libre is in negotiations with Netflix. Pitman asked all in the room to go viral with the film through all their social networks, etc. He has produced a companion film, "Hempsters: Plant the Seed," narrated by Woody Harrelson and featuring Willie Nelson, Ralph Nader, and others.

If you are interested in "A NORML Life" for promotional partnerships, events, festivals and conferences, call (206) 697-2374 or email HeartBrain Media's Stephanie Bishop: Stephanie (at) heartbrainmedia (dot) com.

To request a screener for review, or to arrange an interview, contact Cassie Brewer: cbrewer (at) cinemalibrestudio (dot) com

See other information about Grassroots distribution of the film.
Posted by Tokin Woman at 10:01 AM No comments:

The Girl's Got Camerones

Tokin' Woman Cameron Diaz lights up more than the screen in Bad Teacher (2011), a raunchy but charming comedy a bit in the style of There's Something About Mary (1998), in which Diaz tokes with Ben Stiller as they reunite onscreen.

Diaz carries the film as a shallow but smart gold-digging woman who's teaching school (as little as she can) while saving for a boob job. When she's caught by a student smoking a "medicinal" pipe in the school parking lot, she couldn't care less. But she takes an interest in a co-worker played by Phyllis Smith ("The Office"), encouraging her to smoke a doobie; next thing you know she's happily groping a cowboy in a bar.

Casting her former boy toy Justin Timberlake as a nerdy pantswetter who parodies himself singing a love song in pitch-perfect style, her other love interest is played by Jason Segel, who's the stoner in "Freaks and Geeks" and, as Marshall in "How I Met Your Mother," bonds with Ted over "sandwiches" in the “How I Met Everyone Else” episode.

The film handles marijuana in irony, moderation and jubilation, with a dash of heart, and soul.

Diaz told George Lopez she "had to have" bought pot from Snoop Dogg while both were in high school in Long Beach.

Best note in the new Harold and Kumar 3-D Christmas extravaganga: when Danneel Harris (Vanessa) tells Kumar not to stop smoking. The actress told High Times in 2008 she smokes pot; neither John Cho (Harold) or Kal Penn (Kumar) partake (so they say).
Posted by Tokin Woman at 8:58 PM No comments: