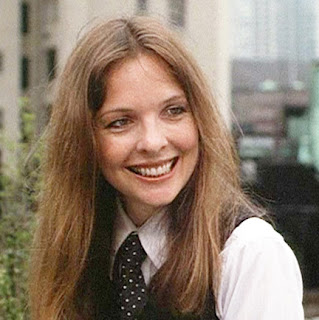 As luck or design would have it, while the Oscars were airing an awards show tonight that beat them all for pure schmaltz and brought self-glorification to a new low, TCM was showing Annie Hall, giving movie lovers an opportunity to view a masterpiece of the form instead.

The original title was Anhedonia, meaning the inability to experience pleasure. Allen's character Alvy Singer suffers from the condition until he meets Annie (Keaton), who for all her fumbling and self-consciousness is a beautiful vessel of pleasure. 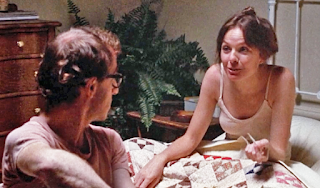 Alvy tells Annie that her whole body is an erogenous zone, and soon it is revealed that she insists on smoking pot before they make love. When Alvy objects, comparing it to a comic getting a laugh too easily, Annie tells him if he'd only smoke with her, he wouldn't have to see a therapist.

The following scene has Alvy picking out books on death for Annie at a bookstore, telling her he divides the world into the miserable and the horrible. Obviously, he refused to smoke, saying if he smokes or drinks, "I get unbearably wonderful."

It's Allen's most direct statement on the drug experience until Alice (1990), a retelling of Alice in Wonderland that's a lot more interesting than the one starring Johnny Depp.

Keaton also smokes pot on film (in a bathtub) in 1982's Shoot the Moon. In 2005, she appeared as the cancer-stricken matriarch of The Family Stone, in which she takes "special" medicinal brownies, and Luke Wilson helps the uptight Sarah Jessica Parker to loosen up with a bit of the holy herb.
Posted by Tokin Woman at 3:03 PM No comments: 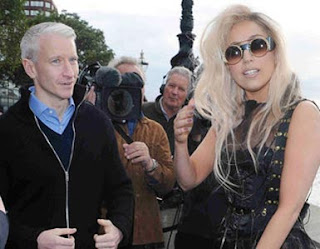 UPDATE 12/9/2013 - After dressing up as a pot fairy for Halloween, Gaga grabbed headlines back from Miley Cyrus by announcing she was "addicted" to marijuana after using it heavily for pain from an injury. With days, she'd backpedaled again, telling a talk show host she still loves to smoke pot, because it makes her feel like she's 17 again.

Sure, she entered the Grammys in an egg. But the more groundbreaking way Lady Gaga sought to hatch herself as the new Madonna was her pre-Grammy interview on "60 Minutes," when she told Anderson Cooper: "I smoke a lot of pot when I write music. I'm not gonna sugarcoat it for '60 Minutes.' I drink a lot of whiskey and I smoke weed when I write." Keeping the mystery alive, she then added, "I don't do it a lot because it's not good for my voice."

Read more »
Posted by Tokin Woman at 8:24 AM No comments: 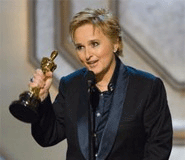 Singer/songwriter Melissa Etheridge has chosen Americans for Safe Access (ASA) to be her charity partner in promoting a groundbreaking new documentary about women and breast cancer. ASA will receive 10% of the proceeds from 1 a Minute, in which Etheridge, Olivia Newton-John, Kelly McGillis, Jaclyn Smith, and many more talk about their journey from prevention to diagnosis, treatment and survival.

Over 200,000 women were diagnosed with breast cancer in the United States in 2010, and more than 40,000 died. A growing number of those living with breast cancer are turning to medical cannabis to treat the symptoms of the disease and the harsh side effects of therapy. ASA is working hard to be sure that those who choose medical cannabis have safe access. Visit the film's web site today to learn more about the documentary and support ASA.

Etheridge spoke openly about her use of cannabis as an adjunct treatment for the nausea caused by chemotherapy in 2005. In October 2010 she appeared with actor Danny Glover and others in support of Proposition 19, to fully legalize marijuana for adult use. She is shown here accepting an Oscar in 2007 for her song, “I Need to Wake Up,” the theme song to VIP Al Gore’s film, An Inconvenient Truth.

Pot was a topic of the show's comedy. Pat Paulsen, performing a shadow puppet routine, joked, "This one won me a blue ribbon up at the Seattle Pottery and Marijuana Festival." Comedienne Leigh French (pictured) had a recurring segment called, "Share a Little Tea with Goldie" [tea being, of course, a jazz-age slang for marijuana].
"She was the hippie character whose original name was Mary Jane Roach, but the censors made me change it," French told Popgeeks in 2020. "From then on, I was appointed a personal censor to catch anything I might try to slip through. I wrote in double entendre all the time, so that certain things the censors thought meant something, our contemporaries knew meant something else (laughing)."
French began her career at the San Francisco improv group The Committee, when "there were only two women in the company at the time. There were always six or seven men, so the women who could improvise and hang with the guys had to be incredibly versatile, and really had to fight for all their stuff, frankly. It wasn’t particularly women-centric."

After an improvised appearance in Season One as of the Smothers Brothers Show as an audience member, Leigh was invited onstage by Tommy in Season Two to introduce her character Goldie Kief (later changed to O'Keefe at the insistence of those insistent censors). "Thanks for coming down," says Tom. "I didn't come down. I never come down," replies Goldie. The segment is shown in Maureen Muldaur's 2002 documentary, Smothered.

In January 1968, French debuted her "Share a Little Tea" sketch with, "I'd like to greet you ladies as I usually do—high!" She then thanks her viewers for getting rid of all the unsightly roaches in their homes—by sending them to her (years before Chevy Chase did the bit). In another sketch, Don Knotts plays a nervous guest too paranoid to accept tea with a sugar cube—a popular way of dispensing LSD.


French's mock weather forecast (above), notes that the Mexican government is "confiscating and burning large amounts of a peculiar weed," and predicts "northerly winds will push an overall high into [California]...As usual there is also a definite mass of heat which is trying to bring the high down." The bit ends with an expression of hope for more "sunny and human" conditions that would "change the entire climate of our nation. Wouldn't that be wonderful!" Yes, indeed.

Tom Smothers said in Smothered that he and headwriter/"Classical Gas" composer Mason Williams would "sometimes torch a joint" while working on scripts, and told Bionculli that they smoked pot together while listening to an album by the composer of "Gentle on My Mind." Tom said, "We started listening to Johnny Hartford's first album while we were smoking some weed, and said, 'Hey, this is great!'" Glen Campbell and his signature song were soon a part of the show.

Rob Reiner remembered that during the writing of the Smothers Brothers show, "everybody was high, smoking dope and doing stuff like that." Einstein said, "It was not a stoned office, but, I believe grass was smoked." Singer Jennifer Warnes recalled one road trip on which she and Tom dropped acid, and Williams remembered mistakenly eating a batch of French's "specially enhanced" brownies.
During the trial that resulted in a settlement for breach of contract after the show was cancelled, French's skit where she played country singer "Kentucky Rose" who said, "I used to play bluegrass, but a couple of weeks ago I started smoking it" was entered into the court record. French did a segment playing that character with Campbell and Jonathan Winters (above). Tokin' Woman Tallulah Bankhead was among the show's diverse guest stars.

French played a San Francisco hippie named Cobalt Blue in a 1968 episode of I Spy, and she and fellow Committee member Rob Reiner also played hippies in the 1969 "Flower Power" episode of Gomer Pyle, U.S.M.C. She also supplied the boho vibe to 1970's W-USA with Paul Newman and Joanne Woodward and appeared in The Great Smokey Roadblock (1977) with Henry Fonda and Susan Sarandon. But although Dinah Shore picked French to be her sidekick, she was blacklisted from television for eight years. She has had a long career doing voice-overs for films like Shrek III and working as an ADR coordinator for films by Reiner and others.

Another Leigh, Leigh Taylor Young, appeared as a pot-brownie maker in I Love You Alice B. Toklas.

A tip of the teacup to this pioneer pothead, Leigh French.

Posted by Tokin Woman at 8:06 AM No comments:

Praise the Lord and Pass the Joint

Tony Newman and Stephen Gutwillig of the Drug Policy Alliance took notice of a contestant on the Family Feud answering the question "What Is Something People Pass Around?" with the obvious answer: "A Joint."

Not only that, but "joint" was on the Family Feud survey board with 8 responses, causing host Steve Harvey great consternation indeed. When the contestant's opponent in the game guessed instead "the collection plate at church," Harvey congratulated her for saving them all from hell. But "collection plate" was the response of only 4 of those surveyed, so "joint" won the round!

On January 27, President Obama said of drug legalization, "It's an entirely legitimate topic for debate," in answer to a question from a member of LEAP (Law Enforcement Against Prohibition). Obama has not only let himself be intereviewed by Bill O'Leilley, he was in top form addressing the US Chamber of Commerce, the group that dumped in dollars to defeat Prop. 19 in California with horrid ads scaring people about a stoned work force. If we really want innovation in the work force, we should demand workers get properly inspired, a word that means "you breathe in the god," said Sean Dorrance Kelly, co-author of All Things Shining, last week on the Colbert Report.
Posted by Tokin Woman at 9:20 PM No comments: