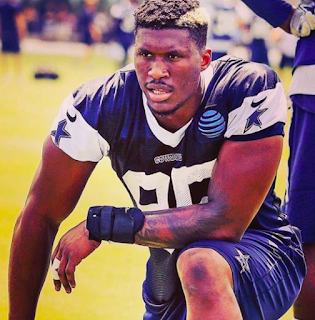 The Las Vegas Raiders have signed former Dallas Cowboy David Irving, 27, who announced he was quitting the NFL last year in opposition to the league's drug policy, "particularly in regard to marijuana," reported ESPN.
Irving was suspended indefinitely for violating NFL's substance abuse policy in 2019, and now is back under "provisional" reinstatement, while he is being tested for COVID.  In March, the NFL's level of THC triggering a positive test was increased fourfold from 35 to 150 ng/ml, among other policy reforms negotiated by the NFL Players Association.
On Instagram, where he announced his resignation from football, Irving calls himself an "NFL Player turned Cannabis Activist." He told Sports Illustrated in February, "I've been smoking since I was in middle school. Always had a 3.0 GPA. Never had any trouble with the law."  He added that cannabis could help the NFL with its CTE (chronic traumatic encephalopathy) problem.
"I know the perception people have of me is that I'm some sort of gangsta, homeless pothead," Irving told SI. "But I gave up football for a bigger cause. I want to change the bias toward marijuana. I want to educate America that it's not a drug, it's medicine."
Read more »
Posted by Tokin Woman at 10:17 PM No comments: 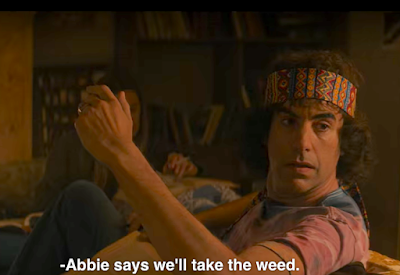 There's a great scene in the new Aaron Sorkin / Netflix movie "The Trial of the Chicago 7" where Tom Hayden (Eddie Redmayne) of Students for a Democratic Society says to Yippie! Abbie Hoffman (Sacha Baron Cohen), "My problem is that for the next 50 years, when people think of progressive politics, they’re going to think of you and your idiot followers, passing out daisies to soldiers or trying to levitate the Pentagon. So they’re not gonna think of equality or justice; they’re not gonna think of education or poverty or progress. They’re gonna think of a bunch of stoned, lost, disrespectful, foul-mouthed, lawless losers. And so we’ll lose elections."
I know this to be true because I campaigned for Hayden when he ran for Governor of California in 1994. I would talk to young people, saying, "You know Tom Hayden, the Chicago 7?" Only when I said, "with Abbie Hoffman" did the bells of recognition ring. (Hayden lost that election, and Abbie remains enduringly popular.) 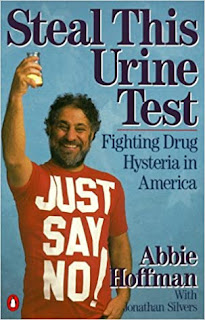 The credits of the movie mention Hoffman's bestseller "Steal This Book" but not its 1987 sequel, "Steal This Urine Test" in which he blows the lid off the bogus urine testing industry that discriminates against marijuana smokers by detecting inactive metabolites that can stay in the body for weeks after use.
Hoffman wrote of NIDA (National Institute on Drug Abuse) chief Dr. Robert DuPont's evolution from a somewhat liberal scientist to a zealot-like proponent of urine testing:
Read more »
Posted by Tokin Woman at 1:06 AM No comments:

Why Red Ribbon Week is a Fraud

This October 23-31, schoolkids across the US will participate in "Red Ribbon Week," an anti-drug education campaign that pressures students to sign an anti-drug pledge. The event began in honor of DEA agent Kiki Camarena, who was kidnapped, brutally tortured, and murdered in Mexico by drug cartel operatives in 1985, at the height of former first lady Nancy Reagan's "Just Say No" to drugs campaign.
However since Camarena's death, more and more allegations have surfaced connecting the CIA and the DEA to his murder. Former cartel employees told USA Today that a DEA official and CIA operative participated in meetings with the cartel where Camarena's abduction was discussed.

The must-see new Amazon documentary series "The Last Narc" interviews Camarena's widow, former DEA agent Hector Barilles who was assigned to investigate Camarena's murder, the US prosecutor of his killers, and two Mexican policemen who were assigned to protect drug lords involved in the crime, revealing the layers of corruption involved.

Read more »
Posted by Tokin Woman at 5:58 PM No comments: