As reported by the Associated Press, The American Academy of Pain Medicine has cancelled its plans for a webinar in July aimed at training doctors on the use of cannabis instead of opiates for pain. The cancellation followed "a request from the U.S. government agency that provided the funding." The agency was the Substance Abuse and Mental Health Services Administration, or SAMHSA, a division of the U.S. Department of Health and Human Services (HHS).

“We cannot speak to the reason that SAMHSA has asked that we not proceed with this webinar, but the webinar will no longer take place,” AAPM spokeswoman Megan Drumm said in an email to AP.

Scheduled speakers for the course, titled "Opioid Prescribing Amidst Changing Cannabis Laws,” were pain doctors from the University of Texas and the University of California, San Diego. They planned to cover how to select patients for medical cannabis, appropriate products and doses, and how to “wean opioids in patients on chronic opioid therapy,” according to the course description. 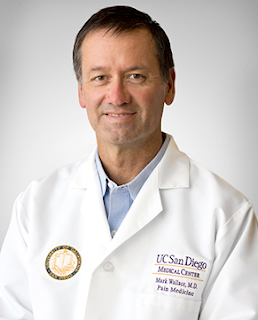 A study released in March concluded that only 9% of medical schools are teaching students about cannabis as a medicine.  “I’m not surprised by the findings,” commented Mark Steven Wallace, MD, chair of the Division of Pain Medicine at UC San Diego Health and one of the speakers scheduled for the now-cancelled webinar. Dr. Wallace said there is an opportunity for experiential learning on the topic at pain clinics like his, where medical cannabis is recommended “every day.”

Dr. Wallace has observed that some chronic pain patients arrive at the clinic after having tried and responded negatively to medical marijuana. “Quite often that’s because they have not been using the right formulation or have been using too high a dose,” he said. “We find that a low dose of a strain that combines THC [tetrahydrocannabinol] with CBD [cannabidiol] is most effective, but you won’t find that mentioned in the literature or taught in the classroom.”

Read more »
Posted by Tokin Woman at 4:00 PM No comments:

Juno/Hera and the Asterion Plant

The month of June is named for the Roman Goddess Juno, known as Hera in Greek mythology.

Hera's devotees wove garlands made from the asterion plant to adorn her statues as an "offer to divinity," according to the historian Pausanias. Asterion ("little star") was one of the ancient names for cannabis, according to the first century C.E. Greek physician Dioscorides, writes scholar Maugerite Rigoglioso in The Cult of Divine Birth in Ancient Greece.

While others (Kerenyi) have identified the asterion as "a sort of aster," Rigoglioso counters that the aster's dominant feature, the flower, is not mentioned by Pausanias in describing the asterion plant. In History of Pre-Clusian Botany in Its Relation to Aster botanist Edward Sandford Burgess writes that cannabis sativa was among the plants known as "asterion" to the Greeks "from the division of its somewhat radiate leaves." Pausanias called it "suitable for use in purification" and Dioscordes said it was called "sacred herb" in this context. The asterion was "twined to create garlands in accord with the widespread use of cannabis for rope-making in the Greek and Roman worlds," (Butrica 2002, "The Medical use of cannabis among the Greeks and Romans," Journal of Cannabis Therapeutics 2(2): 51-70).

Writings at least as early as the 5th century BCE indicate that the Greeks knew cannabis to be a substance capable of engendering a non-ordinary state of consciousness. The Greek god Dionysis is known today as an alcoholic, but some modern scholars (e.g. Jonathon Ott and Brian Muraresku) think what we call Greek wines used alcohol mainly to make tinctures of psychoactive plants. Some of these infusions are thought to contain hemp, dubbed "potammaugis" by Democritus (c.a. 460 b.c.) and possibly why we call it "pot" to this day.
Read more »
Posted by Tokin Woman at 9:36 PM No comments: