More celebrated in other countries than in the US due to its socialist roots, International Women's Day is inspired by the 1909 ladies garment workers' strike and held on March 8 – the date of the 1917 Russian women's "Bread and Peace" strike. It is is now officially "a global day celebrating the social, economic, cultural, and political achievements of women."
Some women's achievements to celebrate this year are: 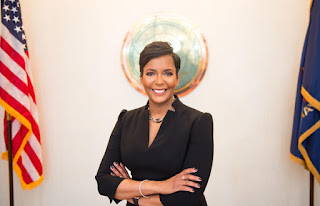 Our Tokin' Woman of the Year for 2019, Jane Fonda, won the Cecil B. DeMille award at the Golden Globes, and gave a great speech about inclusion. 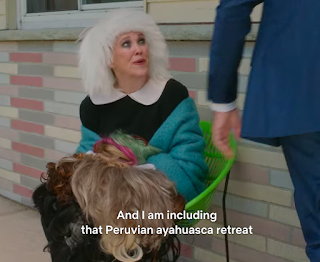 Andra Day picked up a Globe for her portrayal of drug war victim Billie Holiday, and Catherine O'Hara (pictured) won one for her role on "Schitt's Creek" wherein she tokes, and ruminates on taking ayahuasca with Al & Tipper in what will be known as The Performance of a Thousand Wigs).

Dolly Parton, who had an "old fashioned ladies pot party" with Fonda in 9-5, donated $1 million to help pay for the Moderna COVID-19 vaccine and re-wrote her hit song "Jolene" to encourage people to get vaccinated.

Beyoncé gave a $10K grant to a black-owned cannabis company.

Michelle Alexander's seminal book "The New Jim Crow" made a list of Top 10 greatest works of journalism in the last 10 Years.

Miley Cyrus and Joan Jett, both pot lovers, crushed it at the TicToc Superbowl party for first responders. 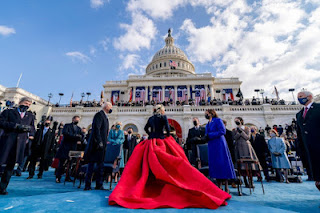 Lady Gaga lifted us up with her rendition of "The Star Spangled Banner" at the inauguration and Chelsea Handler launched a an Inauguration Day-themed cannabis kit titled “America is Back” to benefit the nonprofit Cage-Free Repair.

Oh yeah, and our Tokin' Woman of 2020 Kamala Devi Harris was sworn in a Vice President. (Devi is another name for the Goddess Parvati, one of the International Tokin' Women presented here.)

Posted by Tokin Woman at 2:36 PM No comments: