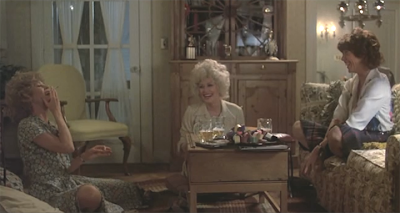 I just re-viewed 9 to 5 (1980), the classic film with Lily Tomlin, Jane Fonda and Dolly Parton, and had to write here about it.

I like the scene with Tomlin's teenage son, when she's stressing about getting a promotion at her job from her sexist boss.

She replies: "Josh, you know how I feel about that. Besides your grandmother would pitch a fit if she even hears you mention the word marijuana."

Josh: "She doesn't understand moderation. You're the one who keeps saying harm springs from excess. I'm talking about one joint."

So, messages about moderation coming from the younger generation, as taught (properly) by an elder.

Tomlin's character takes the joint, and proffers it to her colleagues played by Fonda and Parton, telling them, "We could have ourselves an old fashioned ladies' pot party." Fonda plays an innocent, recent divorcée who pronounces it "really good pot" after the gigglefest that follows.

It's a scene that harkens back to Easy Rider (1969) in which her brother Peter turns on the innocent Jack Nicholson. It took women a little longer to get there, but we did. The ladies bond over the experience, and soon concoct a way to bring justice to the workplace. In one scene Fonda announces to her ex-husband that she smokes marijuana as part of her awakening.

As an extra treat, the film features VIP Sterling Hayden as the company CEO who sweeps in to finally give the dastardly boss (Dabney Coleman) what he deserves.

The film was viewed on Valentines Day 1981 by Ronald and Nancy "Just Say No" Reagan, after Ronnie wrote in his diary, "Funny—but one scene made me mad. A truly funny scene if the 3 gals had played getting drunk but no they had to get stoned on pot. It was an endorsement of Pot smoking for any young person who sees the picture." I guess he missed the moderation discussion with Tomlin's son. And, getting drunk would have been fine with him.

Decades later, the movie was just about the only example a recent New York Magazine article could find of women smoking pot together on film, in a world where only "every once in a while you’ll get a Meet the Fockers–style mockable hippie-mom type."