Helen Hunt Takes Us on a Wild "Ride" 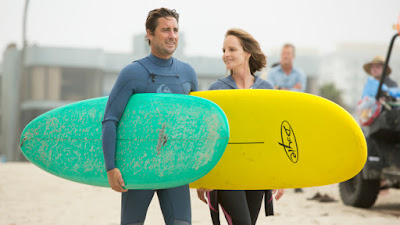 Written and directed by actress Helen Hunt (The Curse of the Jade Scorpion, What Women Want) the movie Ride now on Netflix is full of wit, heart...and, surprisingly, pot smoking.

I confess I'd watched it, not knowing about Hunt's involvement, because I'd watch Luke Wilson (Idiocracy, The Family Stone, Bongwater) in anything. He's typically endearing here as Ian, the surfing instructor to Hunt's character Jackie, a high-powered New York editor who follows her wayward son Angelo to California and ends up on a quest of her own.

The 52-year-old Hunt, who has surfed for 10 years, is thrilling to watch as her character learns to surf in the film. And her rapid-fire dialogue, reminiscent of her role as the quintessential modern wife in TV's Mad About You, is refreshingly honest and direct. (Only a woman could write the line, spoken while arguing with her adult son: "Because one adult came out of the other adult's vagina.") 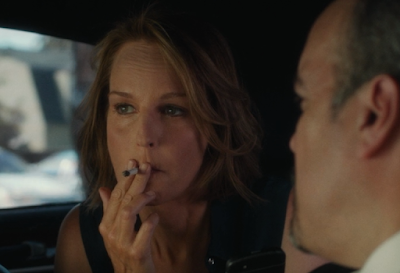 After Jackie tries some pot possibly belonging to her son, she really begins to open up, confronting past issues long bottled up and better able to express her emotions. I confess I wasn't expecting that.

Inevitably, it gets heavy-handed in parts, as when Ian refuses to smoke and Angelo gets turned off by a role model who turns out to be a pot dealer.

As the film states about the ending to the story Angelo is writing, "It just has to be surprising and inevitable." So is Ride. So is life.

In 1980 Hunt played a schoolgirl who smokes pot and is unable to write a book review (ironically, of Moby Dick) on the TV sitcom The Facts of Life. Possibly this was one of the sitcoms that was bribed by the federal government to churn out anti-drug propaganda. Charlotte Rea, who played the housemother in the series who berates Hunt's character over her pot smoking, accidently doses the ER cast at their Christmas party in 2008 with her special brownies, made for a friend in chemo.

Eleusis and the Equinox

I am reminded, as we ring out the Hebrew year 5775, that the fall equinox is also the time of the nine-day pilgrimage to Eleusis in Ancient Greek times, for the Eleusinian Mysteries—the Burning Man or Grateful Dead concert of its day that honored the grain goddess Demeter.

In 440 BC the historian Herodotus observed Scythians using cannabis ritualistically, around the time Greek playwrights Aristophanes and Orestes wrote about the Eleusinian mysteries in their plays.

In Roman times, Demeter became known as Ceres or Pomona. Marcus Tullius Cicero, the Roman orator who gave us the enduring maxim, “Let the punishment fit the crime” wrote:

For it appears to me that among the many exceptional and divine things your Athens has produced and contributed to human life, nothing is better than those [Eleusinian] mysteries. For by means of them we have transformed from a rough and savage way of life to the state of humanity, and have been civilized.”

Nonetheless, in 392 AD, the Romans outlawed the Mysteries.

According to legend, a king of Thessaly named Erysichthon ordered all trees in the sacred grove of Demeter to be cut down in order to build himself a feast hall. As punishment, Demeter inflicted him with insatiable hunger, driving him to exhaust all his wealth and finally, in abject poverty, devour his own flesh. It seems to me humanity is on that same path.
Posted by Tokin Woman at 8:37 PM No comments: