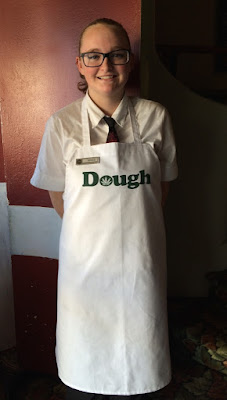 5/1/2016 - I caught the movie Dough last night at a theatre where the workers were wearing cute promotional aprons provided (apparently) by the distributor. This obliging gal let me take her picture.

The film stars British actor Jonathan Pryce as Nat, a kosher Jewish baker in London who hires Ayyash (Jerome Holder), a young Muslim refugee from Darfur, to revitalize his business just as it is fighting a takeover by crummy capitalist Sam Cotton. Ayyash has a side business selling weed for the violent thug Ian Hart, and when he dumps his stash into a mixing bowl to hide it at the bakery one day, the dough magically becomes, well, Dough, with lines out the door for the suddenly popular business.

The film is introduced by 75-year-old Pauline Collins (Shirley Valentine) as the widow who owns the bakeshop, and has "the best bridge club meeting ever" after she and the other ladies enjoy some brownies with the special ingredient. Other old folks suddenly start dancing, and more, with the benefit of Ayyash's recipe for fun. Nat's staid family gets a needed night of the giggles following grandpa's dagga dessert, and Nat himself is able to express his feelings about his dead wife after he downs a plate of pot brownies provided by Ayyash.

But all this beneficence comes to a halt after Cotton discovers the secret to Nat and Ayyash's success, and Hart shows up to make more mischief. The film has a predictably moralistic end, with the business apparently going forward without its most important ingredient.

Dough is reminiscent of the 2000 British film Saving Grace, in which a widow (Brenda Blethyn) and her caretaker (Craig Ferguson) grow weed to save her home, and inadvertently turn on the denizens their Cornwall village. That movie, while delightful, also had an (admittedly, by Ferguson) contrived ending, and its spin off TV series Doc Martin, starring Martin Clunes as the town doctor who puffed pot in the movie, was cleaned up to erase that charming aspect of his character.

Collins says the film is about "acceptance, and breaking bread together" and to some extent it is, but its ending disappoints. Now that we're moving towards marijuana legalization, can we dispense with depictions of violent criminals who have control of the marijuana business, and the cops who put the kibosh on all the fun? Cotton might have found enlightenment after he ate the magic muffins and done something for the good of the neighborhood. Or the injustice of the marijuana laws, and the violence they bring, might have been addressed. The marijuana/muslim connection is also skirted, with Ayyash making sure he didn't taste his own goodies. 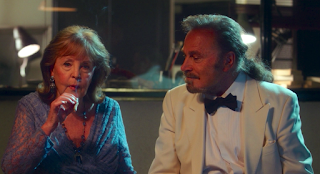 UPDATE 3/18: Pauline Collins is back in the 2017 British film The Time of their Lives (now on Netflix), as a pensioner housewife who ends up smoking a joint for her arthritis with none other than Franco Nero, who was the dreamy Sir Lancelot in Camelot. Both actors were 76 years old when they played the scene.

"I don't smoke," Collins objects when Nero pulls out a joint. "I don't either, but I make an exception for drugs," he replies. The two giggle and bond, leaving Joan Collins, who is splendid playing a faded movie star, upstairs drinking. Ah, if only life were like the movies.
Posted by Tokin Woman at 9:02 AM No comments: