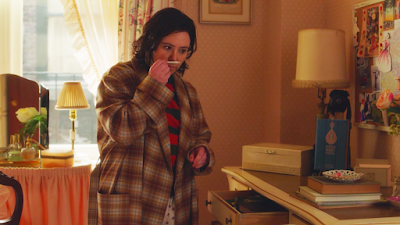 Another memorable character of Borstein's, Ms. Swan, smuggled in "the medicinal kine" on MadTV, and liked to be "just a little bit stone" in a skit where she outwits a protection racketeer. 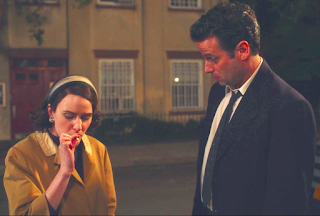 Mrs. Maisel leads a charmed, wildly unrealistic life, but since Brosnahan's last Netflix appearance was as a call girl on House of Cards who becomes the obsession of powerful politico—leading to an end almost worse than the subway slaying of another female character—it's nice and notable that the matriarchal village behind Mrs. Maisel, which Brosnahan thanked in her acceptance speech, has given her a more positive and empowered role to portray.

The plot of the series plays into just what Glenn Close—who toked onscreen herself in The Big Chill—got a standing ovation for at the Globes, when she spoke of her mother sublimating her own needs to her family's. Mrs. Maisel, who wears a cocktail dress and pearls as did Tokin' Woman Joan Rivers, is also said to be based on housewives-turned-comics Phyllis Diller (whose hair has inspired a marijuana strain) and Totie Fields. But actually, show creator Amy Sherman-Palladino said at Paley Fest it was inspired by her father, a New York comic, who would sit around with his friends in the backyard smoking "odd-smelling cigarettes" and making each other laugh.

Read more »
Posted by Tokin Woman at 1:26 PM No comments: