Rip Torn and His Hashish Connection 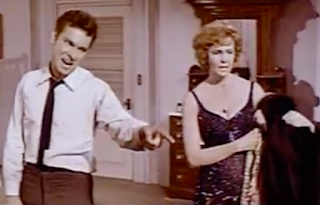 This week we lost Rip Torn, the versatile actor who during his career played three roles in "Sweet Bird of Youth," including (pictured) the role of Chance, the young gigiolo who tries to blackmail aging actress Alexandra del Lago over her hashish habit in one of the earliest mentions of marijuana on film.

I found online this screen test of Torn, who portrayed the evil Tom Finley Jr. in the 1962 movie, playing Chance against Geraldine Page, the lead actress to whom Torn was married.

Tennessee Williams wrote the play for actress Tallulah Bankhead, and she performed readings of it before its production. Bankhead was the subject of scandal in 1951 when her former personal secretary claimed his job included procuring pot and rolling joints for her.

Read more »
Posted by Tokin Woman at 9:55 AM No comments: