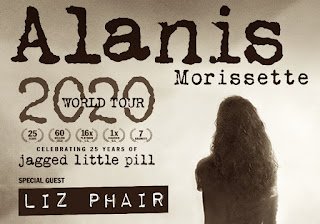 Singer-songwriters Alanis Morissette and Liz Phair were set to tour together this summer; instead a dual interview with them was published today in the LA Times.
The two breakthrough artists made headlines and trended on Twitter by opening up about being female in a male-dominated rock world back in the day. They also talked about how songwriting helped them navigate life, and not feel "insane."
"Not many people can sit with themselves and go inward and investigate," Phair observed. "A lot of people avoid it. But the pandemic has certainly forced people to do that."

"But for introverts and empaths, the internal world is heaven. It’s rich," Morissette replied.

Phair has spoken out in favor of marijuana legalization since 1993, and smoked pot with Joe Rogan on his podcast in 2018.
"I was never much into alcohol. I prefer marijuana," she said. "Marijuana is like shining a flashlight onto your unconscious." Morissette told High Times magazine in 2009, "As an artist, there's a sweet jump-starting quality to [marijuana] for me...So if ever I need some clarity... it's a quick way for me to get to it."
Read more »
Posted by Tokin Woman at 3:28 PM No comments:

George Lopez to Willie Nelson: Can Someone Be Too High?

It was "Lopez Tonight" all over again as George Lopez, who got lots of stars like Cameron Diaz to "out" their marijuana use as the first Mexican-American talk show host, guest hosted on Jimmy Kimmel's show tonight and interviewed Very Important Pothead Willie Nelson.

"Cannabis is so widely accepted now—marijuana—is it shocking to you, how well it's being received?" Lopez asked. "No, I always knew that people would realize its benefits, and I think now that it's legal medicinally in 30 states and a lot of states recreationally, it's on the way, and I think it's a good thing," was the response.

Read more »
Posted by Tokin Woman at 1:21 AM No comments:

NOTE: I tried not to include "spoilers" but you might want to watch the series before reading too much of this!

Beecham House, the current PBS Masterpiece* series from female director/producer and force of nature Gurinder Chadha (Bend It Like Beckham, etc.) presents an Indian, and a female, point of view of the British occupation of India. The sets and costumes are spectacular, and the acting is top notch. And yes, there are drugs.

Set on the cusp of the 19th century in Delhi just before the British ruled in that region, we're first introduced to hookah smoking by Daniel Beecham, the bad brother of the British protagonist, who is enjoying himself in a brothel, exhaling smoke like a devil while ominous music plays at the end of Episode 1.

It was likely hemp in the hookah. The extensive Indian Hemp Drugs Commission Report, completed in 1894 by the British,was over 3,000 pages long, and detailed the many traditional religious practices of India regarding cannabis, concluding that the use of hemp was common among Indian people and that, at least in moderate doses, it had little or no detrimental physical or moral effects on them or their society.

Read more »
Posted by Tokin Woman at 9:35 PM No comments:

UPDATE 11/20: The newest Gallup poll has 69% of men and 66% of women supporting legalization, only a three-point difference.
According to the latest Gallup poll, 70% of Americans say that it is morally acceptable for adults to smoke marijuana, an increase of five percentage points since Gallup last posed the question in 2019.

The jump is attributable to a change in women's perception. In 2019, 62% of women said they thought smoking marijuana was acceptable, compared to 69% of men. This year, 70% of women and said they approve, an increase of 8%, while the same 69% of men were in approval.

Longtime, tremendously hard-working prisoner advocate Amy Povah of the Cando Clemency Foundation clued me into this story on her Facebook page. Please support her and other groups working for prison reform.

The vile Roger Stone* is getting a pass for perjury and other crimes, in part because he could be at risk for COVID-19 if he goes to prison. Meanwhile, thousands of at-risk, nonviolent prisoners remain behind bars with outrageously long sentences, and Trump is talking about withholding federal education funds if schools decide they'd rather not confine students and teachers in an unsafe space this fall.

I agree with Adam Schiff: "With Trump there are now two systems of justice in America: One for Trump's criminal friends and one for everyone else." (NPR missed the "criminal" when they reported that this morning.) Kamala Harris tweeted, "Trump commutes the prison sentence of Roger Stone while the officers that killed Breonna Taylor are still free. The two systems of justice in this country must end."

Trump made a public spectacle in 2019 of granting clemency to Alice Marie Johnson, a black grandmother who had served almost 22 years for a first-time, nonviolent drug crime until she was advocated for by Kim Kardashian. On her reality show, Kim is shown meeting about Johnson with Trump, who only wants to talk about her suck-up husband Kanye West.

Read more »
Posted by Tokin Woman at 8:23 PM No comments:

Johnny Depp Admits to Initiating His Daughter with Marijuana

Lawyers for the UK tabloid The Sun are trying to smear Johnny Depp as a bad parent who "encouraged" his 13-year-old daughter to smoke marijuana during a trial brought about by Depp's $50-million libel suit against the publication for calling the actor a "wife-beater." His former wife Amber Heard has alleged that Depp was abusive during their 15-month marriage, which he has denied, claiming that he was the victim of domestic violence in their relationship.

Asked about his own cannabis use during his marriage to Heard, Depp said it was "very helpful with regard to anxiety, sleep, sense of well-being, calmness," according to Metro UK. He was then asked by attorney Sasha Wass if that was why he "encouraged" his daughter Lily-Rose Depp to try weed when she was 13.  Depp replied that he never encouraged his daughter to try cannabis, but told her if she wanted to try it to come to him instead of trying it elsewhere.

"My daughter was 13 years old and, as we all know, at 11, 12, 13 years old, when you go to high school parties you are approached by people who will want to give you drink because they’re drinking," Depp said on the stand. "They are doing cocaine at 12 and 13, they are smoking marijuana at 12 and 13, they are taking ecstasy at 12 and 13. You don’t want your 13-year-old going into some paranoid tailspin and I knew that the marijuana I had myself, that I smoke myself, is trustworthy, is a good quality and I was bound and determined not to have her try any drugs out there in the world because it’s too dangerous."

Read more »
Posted by Tokin Woman at 3:35 PM No comments:

Today we hear
the sad news that Hugh Downs has passed away at the age of 99.

Born in Akron on Valentine's Day in 1921, Downs served in the Army and began his career in broadcasting as a radio announcer in Lima, Ohio. Downs helped establish the enduring “Tonight Show” franchise in 1957 when he joined the show as Jack Parr's announcer and sidekick. He hosted the game show “Concentration” from 1958 to 1969, was a “Today” show anchor for nine years from 1962 to 1971, and cohosted ABC’s “20/20” with Barbara Walters from 1978-1999, when he retired.

On his ABC News radio broadcast in November 1990, Downs read in his velvety voice a 20-minute story about hemp, at a time when activists (like me) couldn't even get the word "hemp" in the newspaper (they would always change it to "marijuana"). A cassette tape of Downs's commentary produced by documentarians known as "She Who Remembers" became part of hemp activists' toolkit in LA and beyond, when education happened one-on-one with handmade and xeroxed flyers, cheap hemp cloth and twine imported from China or Eastern Europe, hemp seed sold as bird seed, and our bible: Jack Herer's book, The Emperor Wears No Clothes: Hemp and the Marijuana Conspiracy.

Read more »
Posted by Tokin Woman at 3:38 PM No comments: