Today we hear
the sad news that Hugh Downs has passed away at the age of 99.

Born in Akron on Valentine's Day in 1921, Downs served in the Army and began his career in broadcasting as a radio announcer in Lima, Ohio. Downs helped establish the enduring “Tonight Show” franchise in 1957 when he joined the show as Jack Parr's announcer and sidekick. He hosted the game show “Concentration” from 1958 to 1969, was a “Today” show anchor for nine years from 1962 to 1971, and cohosted ABC’s “20/20” with Barbara Walters from 1978-1999, when he retired.

On his ABC News radio broadcast in November 1990, Downs read in his velvety voice a 20-minute story about hemp, at a time when activists (like me) couldn't even get the word "hemp" in the newspaper (they would always change it to "marijuana"). A cassette tape of Downs's commentary produced by documentarians known as "She Who Remembers" became part of hemp activists' toolkit in LA and beyond, when education happened one-on-one with handmade and xeroxed flyers, cheap hemp cloth and twine imported from China or Eastern Europe, hemp seed sold as bird seed, and our bible: Jack Herer's book, The Emperor Wears No Clothes: Hemp and the Marijuana Conspiracy. 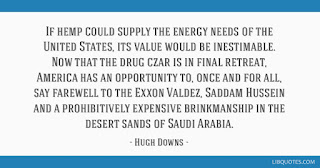 To have the hemp story told by one of the most beloved and trusted voices in broadcasting was powerful indeed. LBJ said after Walter Cronkite began to criticize the Vietnam War, it
was lost; the same could be said of Downs and the War on Hemp, and Drugs.

As part of a compilation tape of drug war stories called "Seeds," Downs's hemp broadcast was widely distributed, says Tim Perkins, sound engineer and partner to the dearly departed Genie Erstad of "She Who Remembers," who recorded every hemp rally and numerous political events in LA in the early 1990s. "Seeds" also has a commentary by Downs about the militarization of the drug war (something that continues today); interviews with medical marijuana patient/pioneers Robert Randall and Elvy Musikka; psychedelic explorer Terence McKenna; plus music from Jello Biafra, Amy Sorrell, and others. "'Seeds' went all around the world," Perkins says. "We got phone calls and and letters from all over telling us of the tape, and those who were copying and spreading it everywhere." Perkins is continuing to document the marijuana movement as part of the 420 Archive at UC Berkeley.

Also departed this week, at the age of 98, was Carl Reiner, who among his many accomplishments took a pothead (John Denver) and made him see god in the delightful 1977 movie "Oh, God."
Posted by Tokin Woman at 3:38 PM