Paltrow Power Puffs in "The Politician"


Paton's mother Georgina, played by Gwyneth Paltrow, is coming into her power this season, with Paltrow perfectly spoofing the public perception of her as an entitled Hollywood princess for whom everything comes too easily. Georgina languidly smokes from a hookah in one scene as she mounts a Marianne Williams–style campaign for California's Governor, during which she proposes seceding from the union, arguing that, "Most of our federal tax dollars go out of state to people who think that we are pot-smoking, Satan-worshipping abortion doctors or something." Elsewhere, she utters lines like, "Sorry sweetheart, I don't remember young people, it's a tic I have," and "I'm going to get stoned and have a bath." 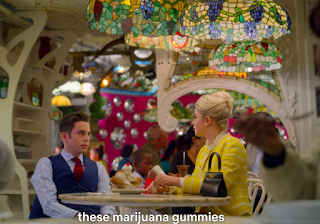 The young people, meanwhile, seem to prefer edibles. Payton's girlfriend Alice (Julia Schlaepfer) brings him a variety of treats, including marijuana gummies, to comfort him after a hard day (pictured right).

And a first date for campaign staffer McAfee (Laura Dreyfuss) goes like this:
She: "Not a serial killer, right?
He: "Nope. You?"
She: "No. Good. Would you like a glass of wine?"
He: "That would be great. Um, I brought edibles. You want one?"
She: "Yes, thank you."

The series depicts seedy politics as its absurd worst, with subtle digs at Trumpism, and women often calling the shots. I love that when Dede is tapped a possible VP candidate, it's called making "herstory" (since the title of my book is Tokin' Women: A 4000-Year Herstory).
Paltrow is co-producing The Politician, which seems to be what a woman has to do to get a good role these days.* It doesn't hurt that series co-creator Ryan Murphy ("the most powerful man in television") set her up with her new husband and their creative partner Brad Falchuk.

Paltrow vaped her way through a cover shoot for her magazine "Goop" in 2017, and told Howard Stern in 2018 that she smokes weed "sometimes....it's legal now in California." Good for Gwyneth for showing in her art and her life that a woman can be powerful on pot. Now, if we can truly get a woman elected President we can start to clean up our planetary messes.
*I tried watching Steve Carrell in Space Force, but couldn't get over the fact that his wife, played by the stoner "Friend" Lisa Kudrow, is suddenly in prison with no explanation given. Because women are so minor? Googling for an explanation, I could only come up with multiple stories about the wig Kudrow wears in the role.
Posted by Tokin Woman at 5:48 PM