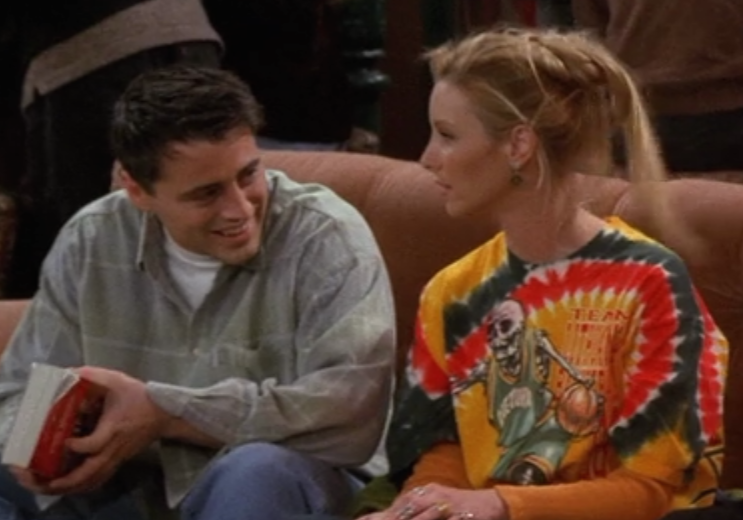 I always thought Phoebe on Friends was the unsung stoner chick of the group. The most original character on the show, she was a guitar-strumming sweetheart with off-the-wall logic that everyone loved.

Phoebe was played by Lisa Kudrow, who went on to arguably the most interesting post-Friends career: she starred in an ahead-of-its-time faux reality TV show and now executive produces "Who Do You Think You Are?" a show where celebrities conduct geneological research live (last week's episode had Lionel Ritche discovering one ancestor was a white slave owner who provided in his will for the education and housing of his great grandmother, a slave, and her child).

Other than Ross (David Schwimmer) outing himself on Thanksgiving to his parents as a college pot smoker (something we should all do), I never caught a pot reference on Friends, until perhaps the other night, when "The One With Phoebe's Uterus" (Season 4, episode 11) re-aired. The episode stars Teri Garr in her final performance as Phoebe's birth mother, who Phoebe consults for advice when she is asked to act as a surrogate mother for her brother and his wife. Upon entering her house, Phoebe says in another context something like, "I didn't know you did pot," which Garr shrugs off.

Phoebe shows her total commitment to the values of the 60s when she suggests she and her fiancee donate their wedding money to charity. 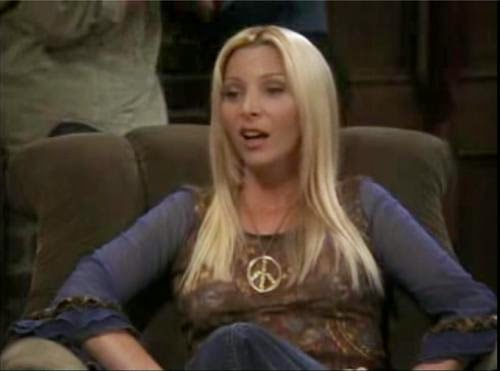 Friends was in the news when their pot dealer was busted on the set. But so far, the only cast member who has come clean as an occasional smoker is Jennifer Aniston, the only Friend to win an Emmy for her performance, and certainly the one with the most successful film career.

Meanwhile, Gossip Girl actress Michelle Tractenberg reportedly had to do some research when her "longtime pal" Topher Grace of That 70's Show asked her to play a pothead in the upcoming film Take Me Home Tonight.

"I play a goth stoner chick and I don't know anything about the weed," she told UsMagazine.com on Feb. 15 at a party celebrating her recent Maxim cover. So she polled her friends, "who are apparently a bunch of f--king stoners," she told Us.

Despite depicting weekly smoke-filled circles in the basement and casting Tommy Chong, That 70's Show never showed viewers its bong. And marijuana was never mentioned, even when Stephen is arrested for "holding" when he takes the rap for cheerleader Jackie (Mila Kunis). 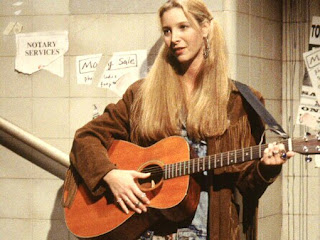 UPDATE 4/15 - Thanks to Netflix airing all 10 seasons of Friends, I've been able to watch and catch a few pot references, confirming Phoebe's and Ross's marijuana connections.

In the Season One episode, "The One With the Stoned Guy," Phoebe drives Jon Lovitz to Monica's apartment so she can cook him dinner. She reveals that Lovitz's character smoked a joint on the way over, and demonstrates that she knows the vocabulary. "You know, lit a bone? Weed? Hemp? Ganja?"

In Season 2, Episode 9, wherein Monica is baking Christmas cookies claiming they speak to people, Phoebe comments, "A plate of brownies once told me a limerick." "Were those funny brownies?" she is asked. "Not especially, but you know what, I think they had pot in them," is her response. Two episodes later, Marlo Thomas, guest starring as Rachel's mother, asks, "You know what we should do? Does anyone have any marijuana?" (but Phoebe isn't in the room). 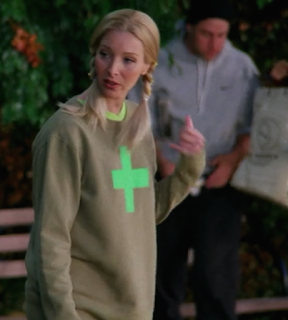 Season 3's nods to marijuana include Monica asking Phoebs the question, "Did you make brownies today?" in Episode 7. In Episode 10, Ross pioneers selling Girl Scout (here: Brown Birds of America) cookies to stoners and becomes known as "the cookie dude" on a nearby college campus. During the episode, Monica says she became overweight as a child after she joined the Brown Birds; she and Ross talk about the cookies he sells her like they're a drug.  In Season 4, Episode 2, Ross, who's gone the rationalist route, asks Phoebe, "You aren't taking your grandmother's glaucoma medicine again, are you?"

Season 6, Episode 6 dresses Phoebe in a T-shirt with a Green Cross on it, just before she runs like a crazy woman, embarrassing Rachel. But by the end of the episode, Rachel, wearing a green shirt, also runs goofy to prove that she's not "uptight" -- and finds out she likes it. By 1999, when the episode aired, the Green Cross had come to symbolize medical marijuana. The writers were aware that was the year because in the following episode, Ross mentions it while commenting on a new girlfriend's "groovy" black light posters. All this leads up to "The One Where Ross Gets High" in which Monica tells their parents that it was Ross, not Chandler (now her boyfriend) who smoked pot in college. Ross's excuse for laying the blame on his friend is, "I don't know, I was all high."

It was revealed by the Wall Street Journal that in the year 2000, our then-drug “czar” Barry McCaffrey “secretly paid television networks to propagandize its anti-drug message.”  The scripts of "ER," "Chicago Hope," "Beverly Hills 90210" and other programs were altered to include anti-drug messages and in return, the networks were allowed to sell advertising time that had been promised to the government. Was "Friends" on the take?