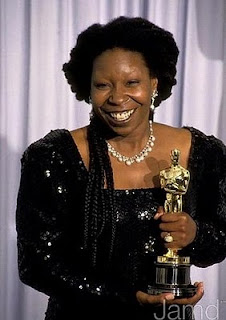 TMZ has unearthed a 1992 tape of Whoopi Goldberg describing how she smoked pot before the Oscars when she won Best Supporting Actress for "Ghost". Saying she smoked "a wonderful joint" when she wanted to relax before the show, "It was the last of my homegrown, and honey, when they called my name..."

Not only did she get to monster-hug Denzel Washington, she gave the most sincere acceptance speech ever. "I wanna thank everyone who makes movies," she said. She graciously acknowledged her co-star Patrick Swayze, who finally started to gain weight after he tried medical marijuana for his cancer in 2009, but sadly, too late to save him.

After the speech, "My mother called me and she said, you smoked, didn't you? Your eyes were just glistening," Whoopi relates. "So I got the Oscar tape to see if you could tell--and you couldn't."

"I know you're not supposed to admit that you smoke pot...they'll call me 'dopehead'...but just because I say that I do it doesn't mean you have to," she said with mock sincerity to chuckles from her interviewers.

Whoopi came out in support of Michael Phelps during that flap, admitting to "having smoked" on The View.

I very much hope Whoopi won't back away from this statement, but rather use it to open debate on our unjust marijuana laws. It will be interesting to see if she talks about it on The View next week (11 AM on ABC). Monday's show with guest Kiefer Sutherland would be a perfect time to discuss the difference between hard and soft "drugs".
Posted by Tokin Woman at 7:52 PM