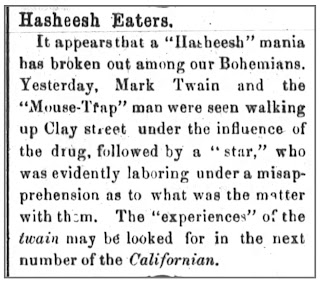 RICHARDS & CO., a San Francisco pharmacy that advertised Hasheesh Candy in 1872, was on the corner of Sansome & Clay streets on the outskirts of Chinatown, near the financial district and (today) the Transamerica Pyramid and Mark Twain Plaza. Clay was the street on which Twain was spotted after having ingested hashish in 1865. It's possible he procured his hasheesh from Richards & Co.

CF Richards & Co., wholesale drugs and chemicals, was defended by Twain for misinterpreting a prescription in 1864. It is depicted in William Hahn’s 1872 painting "Market Scene, Sansome Street, SF" (below), the first major painting of a contemporary California subject. It hangs at the Crocker Museum in Sacramento. 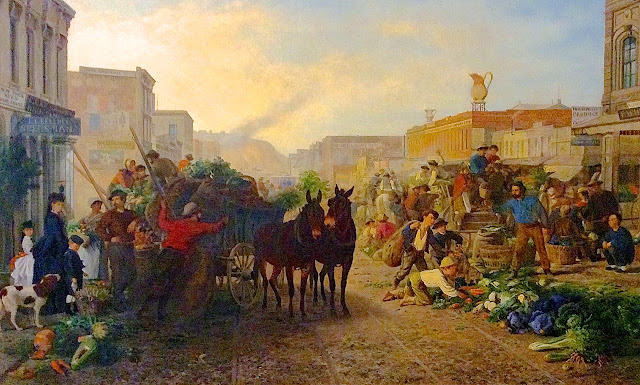 An interesting little advertising/PR campaign (or so it seems) appeared in the San Francisco Chronicle in 1872. It began on September 19, with this item touting the medical uses of “magic” hasheesh conserves:

MAGIC CONSERVES – Debilitated, Hypochondriac Sufferer, physically and mentally in need of an invigorator, pleasant and harmless, use this Hasheesh Confection. For sale at RICHARDS’ corner Clay and Sansome. Price, #1 per box. Send for circular, P. O. Box 1733.

The following day, recreational use was included in this ad:

MAGIC CONSERVES – All who are afflicted use Hasheesh Confection and find relief. Those who seek for novelty use it for its exhilarating effects. Price $1 per box. Send for unique circular, P. O. Box 1733 or RICHARDS & CO., Druggists. For sale by druggists generally.

One month later, on October 20, this item appeared just over the Church Notices:

ALL who have used the MAGIC CONSERVES (Hasheesh) speak of it in the most glowing terms. Two days later, another ad previewed a coming article: TRY THE MAGIC CONSERVES (HASHEESH), and if your dreams do not equal Bayard Taylor’s or De Quincy’s, write to Box 393.

On October 25, this curious personal ad was published:

Fannie—I DID TRY THE HASHEESH; I will be there to-night. FRED.

Perhaps Fred tried hasheesh at Fannie’s suggestion, or so it would appear. Or perhaps an inventive public relations man placed the ad himself.

Finally, on October 27 a long article with copious quotes from Bayard Taylor appeared in the Chronicle under this headline:

PECULIAR DELIGHT. In the Realms of Bliss – Heaven on Earth—The Wonderful Hasheesh Candy—What the Great Bayard Taylor Says of it.

Posted by Tokin Woman at 2:49 PM No comments:

As a treat for those of us (almost everyone, it seems) who are "sheltering in place" these days, the Metropolitan Opera is streaming, free of charge, an opera every night this week. Last night was Bizet's Carmen, the story of a tempting and  tempestuous Andalusian gypsy (more properly, Romani) who lures her soldier/lover Don José into the freewheeling world of a band of smugglers—but just what they were smuggling is not revealed.

Carmen is based on the 1845 novella by Prosper Mérimée, who traveled to Spain and its region in 1830, where María Manuela Kirkpatrick de Grevignée, the Countess of Montijo, told him a story that became Carmen. Mérimée, also a noted archaeologist and historian, was studying the Romani people and so made the character one of them, of whom he wrote, "Their eyes, set with a decided slant, are large, very black, and shaded by long and heavy lashes. Their glance can only be compared to that of a wild creature. It is full at once of boldness and shyness, and in this respect their eyes are a fair indication of their national character, which is cunning, bold, but with 'the natural fear of blows,' like Panurge" [a crafty character in Rabelais's Gargantua and Pantagruel, thought to be about hemp].

"The men generally call themselves grooms, horse doctors, mule-clippers; to these trades they add the mending of saucepans and brass utensils, not to mention smuggling and other illicit practices," Mérimée writes. "The women tell fortunes, beg, and sell all sorts of drugs, some of which are innocent, while some are not." 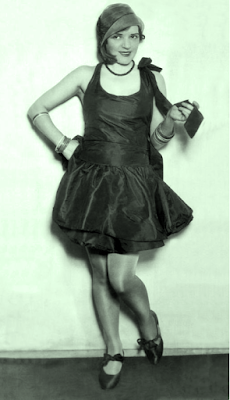 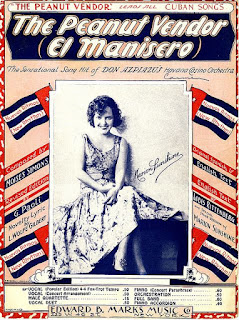 Read more »
Posted by Tokin Woman at 1:30 PM No comments: 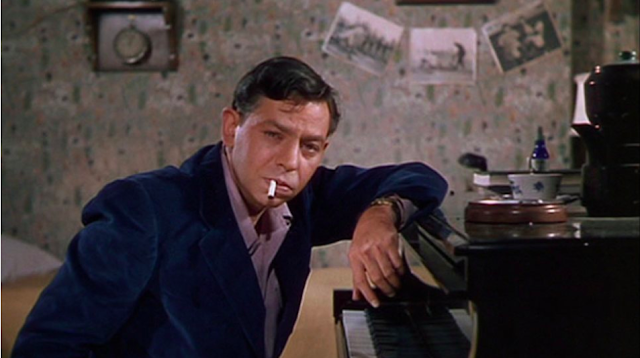 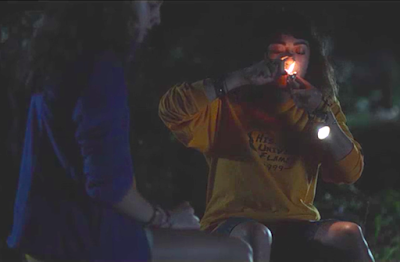 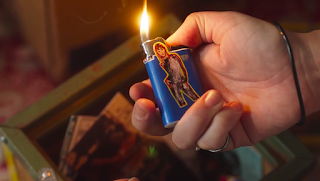 Read more »
Posted by Tokin Woman at 8:21 PM No comments:

Read more »
Posted by Tokin Woman at 3:10 PM No comments: