Hildegarde corresponded with all the top leaders of her day, from popes to emperors, and she left one of the largest bodies of letters to survive from the Middle Ages (nearly 400). Her writings include many sermons she gave, and three volumes on theology. She also wrote many musical compositions, and two volumes on natural medicine and cures. Here's what she says about hemp: 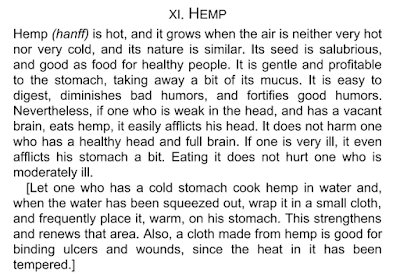 Florence Glaze notes in Medical Writer: Behold the Human Creature that Hildegarde is, “as a medical thinker, clearly interested in the broader universal context through which she might understand and explain the reasons for diseases, both cosmic and microcosmic, as well as revealing the means by which diseases might be vanquished.” 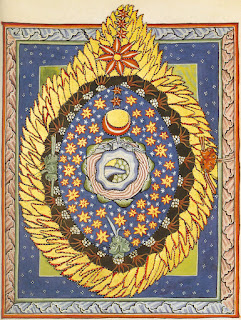 Judy Chicago, in her book Frida Kahlo: Face to Face says, "Historically, very few women artists have attempted to create a personal visual cosmology. The only one of whom I am aware is the great medieval German abbess, Hildegard von Bingen (1098-1179). Her drawing of her vision of the universe (pictured) became the basis for the image on the back of the runner honoring her in The Dinner Party."
Hildegarde said, "I, the fiery life of divine essence, am aflame beyond the beauty of the meadows." Sounds to me like she was smoking something.
A collection of her musical works was recorded in 2015 with the title, "Hildegarde von Bingen: Canticles of Ecstasy." Her Hymn for St. Ursula and Companions mentions "the sweetest scent of myrrh and frankincense," and also the terebinth tree, which was used for its aromatic and medicinal properties in classical Greece, including in the making of bread and brandy [Wikipedia]. Among other biblical references, Terebinths are also found in Isaiah in possible reference to idolatry associated with the trees: "For you will be ashamed of the terebinths that you have taken pleasure in." — Isaiah 1:29
Hildegarde was canonized as a Catholic saint on May 10, 2012, and assigned a feast day of September 17. In October of that year, Pope Benedict XVI promoted her to Doctor of the Church, one of only four women who had been so designated.
Posted by Tokin Woman at 3:10 PM