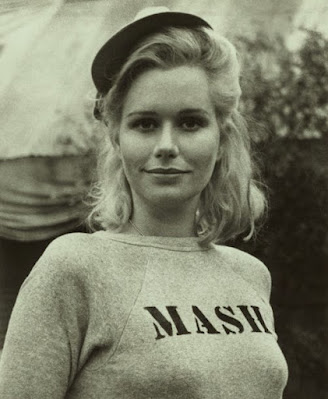 A graduate of Hollywood High who grew up in Long Beach and the San Fernando Valley, Kellerman took acting classes with the likes of Jack Nicholson, Robert Towne, Carol Eastman, and Shirley Knight before landing acting roles on TV shows, including an appearance in the "Star Trek" pilot, and in "The Many Loves of Dobie Gillis" (playing a girl who is captured by the musky smell of Maynard's hair tonic).

Struggling with her weight, Kellerman used diet pills starting at the age of 18 (dexamyl spansules, which "made me feel like Felix the Cat on the inside. They burnt out my nervous system and eventually became a popular street drug.") Of her iconic shower scene in M*A*S*H, she wrote, "For someone like me, who had ridden the roller-coaster of pregnant women's urine, dexamyl capsules, apple diets, and  fruit fasts to always run back to cookies, brownies, and candy—the mainstays of my diet—getting naked was not at the top of any 'to-do' list." She recalled of her time working on the ensemble-style film with director and Very Important Pothead Robert Altman that, "After shooting, we'd smoke a little grass and some would have a drink. We'd all go to the dailies together."
She appeared in other Altman films (Brewster McCloud, Ready to Wear), as well as playing Jodie Foster's mother in Little Foxes and Rodney Dangerfield's love interest in Back to School. She was superb in the 1972 movie version of Neil Simon's The Last of the Red Hot Lovers, and was acclaimed for her performance in the PBS Great Performances production of Big Blonde, based on a poignant Dorothy Parker short story.
Read more »
Posted by Tokin Woman at 7:52 PM No comments:

Watching the documentary White Savior: Racism in The American Church tonight with its segment on the American Indian Boarding schools that separated native children from their families and stripped them of their heritage, I thought of Straight Inc., the discredited program that sought to reprogram marijuana-using teens in the US from 1976 to 1994.

Straight Inc. co-founder Betty Sembler died this week, and her otherwise glowing obituaries briefly mention that the program "was shut down amid allegations of abuse and excessive force."

Sembler, along with her husband Mel, was a high-profile antidrug crusader for decades. According to news accounts, Mel was a lifelong Democrat until he objected to Jimmy Carter's pro-legalization stance after one of the Semblers' sons began smoking marijuana. The Semblers made millions developing shopping centers in Florida, and fundraised so well for Republicans that George H.W. Bush named Mel ambassador to Australia, and George W. Bush made him ambassador to Italy.

Reportedly, Betty was among those who suggested Nancy Reagan take on drugs as her pet cause, and Reagan gave her stamp of approval to Straight Inc., as did former NIDA head Robert DuPont. The program operated 43 centers in 18 states across the US over its 19-year run. Dubbed "warehouses" by participants, the ACLU called them "concentration camps for throwaway teens."

Read more »
Posted by Tokin Woman at 9:04 PM No comments:

When Eartha Kitt Preached to Lady Bird on Pot 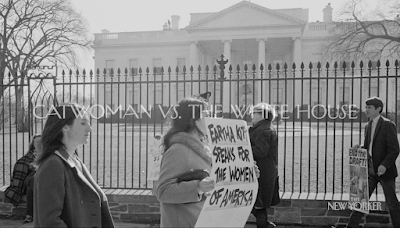 A new New Yorker short documentary covers the 1968 White House luncheon at which Eartha Kitt took on both LBJ and Lady Bird Johnson over their policies on "delinquent" children and the Vietnam War.

The unique and thrilling performer who Orson Wells once called "the most exciting woman in the world" was, among her many accomplishments, James Dean's dance teacher, and she also taught kids in LA's Watts district, earning her an invitation to Lady Bird's "Women Doers" lunch on January 18, 1968.

During the question period, Kitt addressed the First Lady saying, "You are a mother too though you have had daughters and not sons. I am a mother and I know the feeling of having a baby come out of my guts. I have a baby and then you send him off to war. No wonder the kids rebel and take pot. And Mrs. Johnson, in case you don't understand the lingo, that's marijuana."

Kristen Stewart shares an important connection with Diana Spencer, the princess she portrays in the movie Spencer: Being hounded by paparazzi.
On the day her breakthrough film Twilight was released, Stewart was photographed smoking a pot pipe.
“You can google my name and one of the first things that comes up is images of me siting on my front porch smoking a pipe with my ex-boyfriend and my dog,” Stewart told Vanity Fair in 2012. “It was taken the day the movie came out. I was no one. I was a kid. I had just turned 18. In the tabloids the next day it was like I was a delinquent slimy idiot, whereas I’m kind of a weirdo, creative Valley Girl who smokes pot. Big deal. But that changed my daily life instantly. I didn’t go out in my underwear anymore.”
Stewart went on to make more Twilight films and take other more interesting roles: She starred as Tokin' Woman Joan Jett in The Runaways (2010), and as the fictional wife of Neal Cassady, Marylou, in the 2012 film adaptation of Very Important Pothead Jack Kerouac's On the Road. Director Walter Salles learned that Stewart had "placed a copy of On the Road on the dashboard of her first car, that’s how much the book meant to her" and "was so passionate and insightful about the character that he never even auditioned her for the part."
Read more »
Posted by Tokin Woman at 3:14 PM No comments: 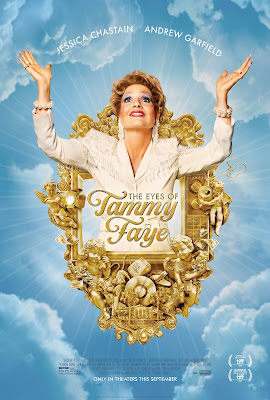 In The Eyes of Tammy Faye, Jessica Chastain transforms into the well known, and often ridiculed, TV evangelist Tammy Faye Bakker.  The film, now streaming on HBOMax and Hulu, is based on a 2000 documentary of the same name narrated by RuPaul.
Tammy Faye LaValley left a "tiny, troubled home" and seven younger siblings in International Falls, MN to study at what was then North Central Bible College in Minneapolis, where she met her husband-to-be Jim Bakker. The two took off on an evangelism tour featuring Tammy Faye's singing and puppeteering, attracting the attention of  TV evangelists like Pat Robertson and Jerry Falwell who put them on the air, where they became popular, and profitable.
Tammy's version of Christianity meant loving everyone, no matter their orientation. In 1985, she has raised the ire of the religious hierarchy around her when she sympathetically interviewed Steve Pieters, an openly gay church pastor living with AIDS. As depicted in the movie, Falwell (a terrificly terrible Vincent D'Onofrino) pitched a fit about it and told Jim his wife needed to be controlled.
Read more »
Posted by Tokin Woman at 6:38 PM No comments: