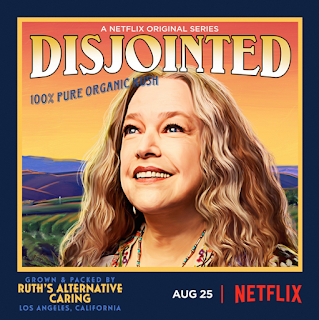 Actress Kathy Bates, who recently said she shared "some good sh##" with Susan Sarandon and Melissa McCarthy, is starring as a lawyer-turned-dispensary-owner and advocate in the new Netflix series "Disjointed," set to premiere on August 25.

I caught a taping of the show's pilot last year, and found it witty, charming and quite funny. Bates's character Ruth and her son, an MBA, do battle over the future of the business, with her wanting to keep it focused on healing and her son focused on profits. It’s a somewhat accurate depiction of what’s taking place in the cannabis industry today.

You can see for yourself in the trailer below:

Bates also played a marijuana-smoking lawyer in the 2011-12 series "Harry's Law," and portrayed Alice B. Toklas's lover Gertrude Stein on film in Woody Allen's "Midnight in Paris." She told AARP Magazine—which dubbed her "Smokin'"—that she's enjoying playing a sexier role for a change, and that marijuana "helped tremendously" to ease nausea and chronic pain from her cancer treatments.
Posted by Tokin Woman at 12:41 PM No comments: