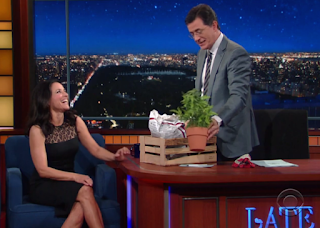 UPDATE: Sarah Paulson took the prize for playing OJ Simpson prosecutor Marcia Clark. Looking Paulson up, I found out that she once ruminated, "So cannabis can further you career, I guess, help you find your inner dolphin."

Maggie Smith took the Best Supporting Actress in a Drama Emmy. Smith played Aunt Augusta in the 1972 film "Travels with My Aunt," based on the Graham Greene novel that begins with Augusta's young paramour hiding his marijuana stash in an unusual place.

Tomlin lost to Julia-Louis Dreyfus of "Veep." Dreyfus's character Old Christine smoked pot in the episode "Burning Down the House," after she scored pot and stashed it in her pants. Dreyfus took a (fake) pot plant to Stephen Colbert on a recent appearance on his show (pictured).

Also taking home an Emmy are Saturday Night Live's Kate McKinnon, who's played Hillary Clinton and a "baking bad" Colorado MJ cookie maker, and Amy Poehler for a guest spot (with Tina Fey) on SNL. Poehler recently said, "Fighting aging is like the War on Drugs. It's expensive, does more harm than good, and has been proven to never end." 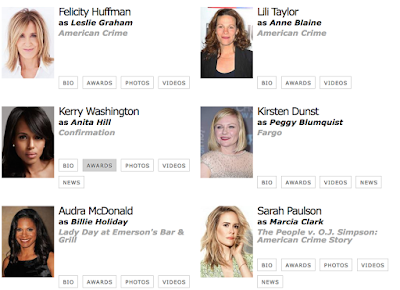 At least three of the six actresses up for an Emmy in the category "Outstanding Lead Actress In A Limited Series or Movie" have a cannabis connection.

The prodigiously talented Felicity Huffman munched out on pot brownies supplied by her mother (played by Polly Bergen) as a cancer patient on "Desperate Housewives" in 2007.

The also talented and hard-working  Kirsten Dunst, who played Mary Jane in the Spiderman movies, told Britain's Live magazine, "I do like weed. I've never been a major smoker, but I think America's view on weed is ridiculous. I mean—are you kidding me? If everyone smoked weed, the world would be a better place."

Audra McDonald has won raves for her portrayal of Billie Holiday, who began to smoke marijuana in the early 1930s when you could buy a couple of joints for twenty-five cents. Billie's name became a code word for marijuana before she was hounded to death by drug agents in 1959.

Also nominated are Lily Tomlin, the second nod for her comedic portrayal of a pot-smoking free spirit in the Netflix series Grace and Frankie (shown), and Kathy Bates, who told Andy Cohen on Bravo TV's "Watch What Happens Live" that she smoked "some good sh##" with Susan Sarandon and Melissa McCarthy.

Television hasn't exactly depicted women and marijuana in a reasonable light. Nancy Botwin, the heroine of Weeds, rarely even smoked it, but Mary-Louise Parker beat out all the Desperate Housewives to take home the Best Actress Emmy in 2005. The she-roes of Broad City are, to me, nothing but n'er-do-wells trying to be dumb and dumber like the men in the bromance comedies Cheech and Chong spawned. Is that what women do together when we get high? I don't think so.

We may see some enlightenment in the forthcoming Netflix series "Disjointed" starring Bates as "a lifelong marijuana-legalization advocate who realizes her dream of running a pot dispensary in Los Angeles." I smell an Emmy nomination next year for Bates, who also played a marijuana smoker in the 2011-12 series "Harry's Law." 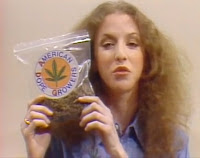 1968 - Leigh French debuts her "Share a Little Tea with Goldie" sketch on the Smothers Brothers Show.

1993 - The "Stash from the Past" episode on Roseanne has her rediscovering weed.

1995 - Phoebe demonstrates she knows many words for weed on Friends. Later episodes joke about her taking brownies, or her grandmother's glaucoma medicine. 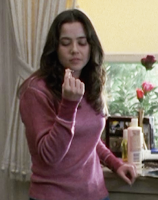 2000 - Linda Cardellini's character smokes pot on Freaks and Geeks, and Jackie (Mila Kunis) is caught with a bag of pot on That 70s Show.

2003 - Carrie gets caught puffing pot on a New York City street in Sex and the City, the same day her boyfriend breaks up with her via a post-it note.

2005 - Weeds, with Mary-Louise Parker playing a pot-peddling widow in suburbia, premieres on Showtime.

2008 - Charlotte Rea, who played the housemother on TV's The Facts of Life, plays a nurse who accidentally doses the cast of ER with her special brownies. 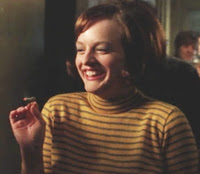 2010 - Comedienne Jenny Slate's character on HBO's Bored to Death is described this way: "She's sexy, she's Jewish, and she has a great vaporizer." 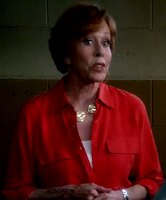 2014 - Broad City debuts; also
- Mozart in the Jungle, based on the book by Blair Tindall, has musicians blowing more than their instruments
- Keeping up with the Kardashians shows Kris and her mother M.J. toking medicinally and giggling
- Garfunkel and Oates sing their song "Weed Card" on an episode where they visit a medical marijuana dispensary