We are approaching the 75th anniversary the day when French author and feminist icon Simone de Beauvoir was taken to a party in New York City, at her request, to experience smoking marijuana. Beauvoir’s experiences in America lead directly to her writing The Second Sex, an "eight-hundred-page encyclopedia of the folklore, customs, laws, history, religion, philosophy, anthropology, literature, economic systems, and received ideas," which remains an influential feminist treatise to this day.

Born in 1908 and educated in a Catholic convent school in Paris, Simone de Beauvoir showed a high intelligence early in life. “Simone thinks like a man,” her father would boast.

She was greatly influenced as a child by Louisa May Alcott's Little Women, and the March sisters. “They were poor and plainly dressed, just as she was. Like her, they were taught that the life of the mind was of higher value than rich food, dress and decoration," wrote Deidre Bair in Simone de Beauvoir: A Biography. George Eliot’s The Mill on the Floss, where the tragic heroine Maggie Tulliver is “torn between her own happiness and what she perceived as her duty to others,” was also an influence. Both Alcott and Eliot wrote stories in which hashish was mentioned, as did Rudyard Kipling, another author whose books were widely available in French translation at the time.

Beauvoir also witnessed her school friend ZaZa so constrained by her wealthy family's expectations for her to marry well that she mutilated herself in the leg with an axe rather than face another round of staid society parties. Meanwhile, ZaZa's cousin Jacques, a suitor to Simone, was free to visit the bohemian regions of the city, introducing her to a world at a time when, "not many bookish virgins with a particle in their surname got drunk with the hookers and drug addicts at Le Styx," wrote Judith Thurman in the introduction to a 2010 translation of The Second Sex.

Read more »
Posted by Tokin Woman at 3:18 PM No comments: 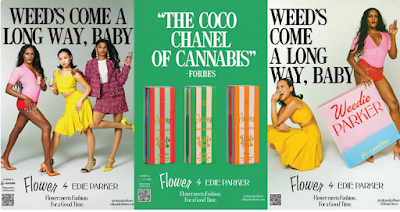 "Flower by Edie Parker" is launching an ad campaign on 4/20 based on the famous "You've Come a Long Way, Baby" ads for Virginia Slims cigarettes in the late 1960s and '70s. The ads are going up in Los Angeles, Chicago, New York and Boston and include the brand’s nickname, Weedie Parker, and models posting with twin packs of pre-rolls called Best Buds.

“These ads were so groundbreaking—the Virginia Slims woman was stylish and independent and bold. But in 2022, she doesn’t smoke cigarettes. She smokes flower,” Brett Heyman, founder of handbag-maker-turned-cannabis-company Edie Parker told Adweek.

Read more »
Posted by Tokin Woman at 6:09 PM No comments:

Yes, Women Can Be "Hysterical" (In a Good Way)

With so much emphasis on comedy and comedians in the wake of the Chris Rock and Louis C.K. flaps, I decided to watch the HBO documentary Hysterical, following a group young female stand-up comedians, with cameos from established comics. The title is doubly apt: "Hysterical" can mean "very funny" but has also been used to denigrate women as having uncontrollable emotions (the root comes from the Greek hystera meaning uterus).
I didn't understand why Chris Rock was needed at the Oscars, since comediennes Wanda Sykes and Amy Schumer were both hosts. Hysterical proves that women stand-ups can hold their on on the stage. The film is full of funny (dare I say, hysterical) stand-up moments from the women, who also tell amazing, and amusing, stories of the hurdles they still must jump to be heard.
Filmmaker Andrea Nevins said some comics refused to appear in the documentary if a comment made by Jerry Lewis about women not being funny would be brought up. Lewis's statement, that he couldn't watch a woman "diminish her qualities" by doing stand up, is similar to arguments used to keep women out of politics, or even grant us the right to vote.
Nikki Glaser stood out to me in the film. She's been open about her marijuana use and how it helps her cope; she recently had a conversation about it with Chelsea Handler, also a pot fan. Margaret Cho, who loves pot so much she developed a strain called Cho-G, tells a tale in Hysterical about getting a call from the producer of her TV show telling her she was overweight. She manages to make funny the fact that she lost 30 pounds in two weeks, leading to an attack of kidney failure on the set. Crazy when you think about how it was rumored that Melissa McCarthy's sitcom was cancelled because she lost too much weight.

Read more »
Posted by Tokin Woman at 2:36 PM No comments: