Top 10 Quotes and Moments from the Oscars 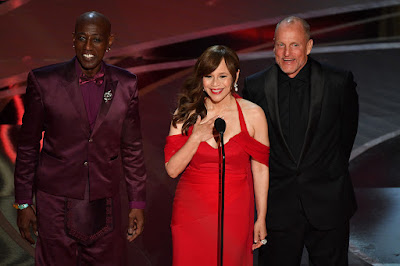 2. "I'm the only sober one up here. Some things haven't changed in 30 years. You guys should have hooked me up." - Rosie Perez on her presenting reunion with White Men Can't Jump co-stars Woody Harrelson and Wesley Snipes, who joked about taking bong rips in the car on the way to the show. 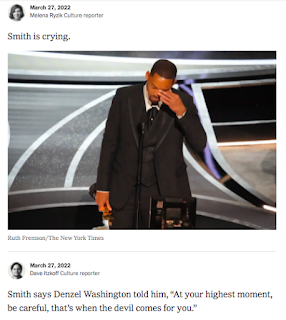 3. "Documentaries make you feel smart, like you read a book or something, when all you really did was get high and watch Netflix."
- Chris Rock before handing the Best Documentary award to Questlove for Summer of Soul. But not before Will Smith thought his wife needed a Big Strong Man to defend her against one of Chris's jokes, and responded with violence and profanity (censored from the feed I watched) in the low point of the night. No wonder Smith cried through his acceptance speech; he could use more getting high, watching Netflix and chilling in his life. Apparently the ayahuasca he tried in 2021 didn't last, or wasn't properly integrated.

4. Tiffany Haddish fist-bumping Amy Schumer when she joked after the incident, "I've been getting out of that Spider-Man costume, did I miss anything?" Haddish, who voiced a stoner Kitty in the recent Freak Brothers cartoon with Harrelson, smoked a joint with Jada Pinkett Smith, along with Oscar co-host Regina Hall and Queen Latifah, in Girls Trip; she defended Will after the show.
5. Marlee Matalin and the crowd waving their hands instead of clapping for Troy Kutler, the second deaf actor to win an acting Oscar, for his role in CODA, in which he smokes pot.
6. "You, sir, were like the Spice flowing through our brains, turning our humble ideas into your imaginary world." - Theo Green, picking up the award for Achievement in Sound, to Dune's director Denis Villeneuve. Villeneuve has said an experience he had eating a too-strong marijuana-laced banana cake his son made for him informed his directing of Timothée Chalamet, who "got it."
7. Frances Ford Coppola thanking producer Robert Evans during the 50th anniversary celebration of The Godfather. Evans was a Hollywood high roller, producing at Paramount studios many hit films, such as Rosemary's Baby and Harold and Maude. He was married seven times, including to Ali MacGraw, and was convicted of cocaine trafficking in 1980 after being entangled in the "Cotton Club murder," for which cocaine dealer Karen Greenberger was convicted. Evans told the Philadelphia Inquirer in a 1994 interview, "Bob 'Cocaine' Evans is how I'll be known to my grave." He died in October 2019. 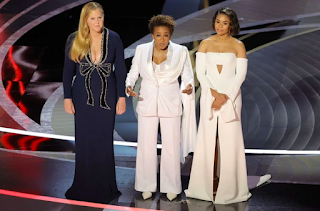 8. “This year, the Academy hired three women to host because it’s cheaper than hiring one man.” -co-host Schumer, who also hit with her joke, "After decades of no representation for women in the movies, we finally get a film about Venus and Serena Williams'...father." Schumer has joined a lawsuit in support of an Arizona mother's use of medical marijuana to treat hyperemesis gravidarum, from which she suffered during her pregnancy.
9. "Hey, it's Harvey Weinstein!" -co-host Wanda Sykes walking past a hideous mask from Lord of the Rings at the Academy Museum of Motion Pictures in Los Angeles in a pre-taped segment. (Weinstein, some have noticed since, has not had his Oscar revoked by the Academy, although his membership was cancelled in 2017.)
10. "Thank you to my team for honoring my inner Cruella." - Best Costume Design winner Jenny Bevan 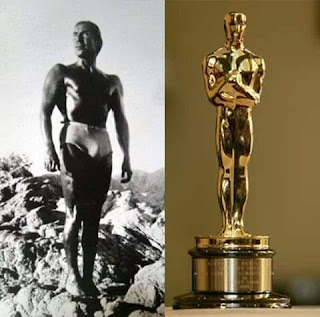 - John Leguizamo clueing us in that the Oscar statue is modeled on Mexican-American actor Emilio Fernándezhttps://twitter.com/TheAcademy/status/1508261427823276034?s=20&t=28KDf4DBcoukE9lTnBXBwQ

- “I never thought that I would be here six days ago." - Rachel Zigler, who starred as Maria in West Side Story but wasn't invited to the ceremony until public outcry got her added as a presenter.

- “To anybody who has ever questioned your identity or you find yourself living in the gray spaces. I promise you this: There is indeed a place for us.” -Ariana DeBose, upon her Best Supporting Actress win for playing Anita in West Side Story, a role originated on film by Rita Moreno.

- Sebastian Yatra performing "Dos Oruguitas" by Lin-Manuel Miranda from Encanto, along with some beautiful dancing. (I liked this much better than the over-produced numbers in the show.) 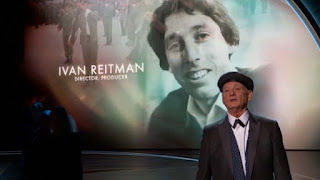 - The "In Memoriam" segment, with tributes to Betty White, Sally Kellerman, and many others, and Bill Murray talking about how producer/director Ivan Reitman (Animal House, Stripes, Ghostbusters) was given a sleeping pill and wrapped in a blanket by his parents to flee Czechoslovakia in a boat. "He married a pretty girl, had some children, and they make movies too." Catherine Reitman is the creator, executive producer, writer, and star of the Canadian series Workin' Moms.

- A woman (Jane Campion) winning Best Director for second year in a row. Jessica Chastain calling for us to be inspired by Tammy Faye's compassion. And more jazz hands (applause in ASL) for CODA as best picture.

Jimmy Kimmel: Denzel Washington told Will Smith, "When you're at your highest moment, be careful; that's when the devil comes for you." And Woody Harrelson was like, "NOOOO!"