Where Are the Top Female Marijuana Users?

The Marijuana Policy Project has released a list of Top 50 Most Influential Marijuana Users, chosen by vote from 200 candidates (and augmented by MPP's 13 "automatic qualifiers").

Only five women make the list. Sarah Palin comes in at number 14, and poet Maya Angelou is number 21. Angelina Jolie is 24th on the list, even though she said she doesn't like pot's effects. Jennifer Aniston shows up at number 38 and Whoopi Goldberg at 44. Lady Gaga missed the cut, coming in at #52.

The maleness of the list could be a reflection of MPP's membership, or of their own selection of the 200 nominees. High Times's readership is almost exclusively young males, and groups like NORML have traditionally been male-heavy (although the NORML Women's Alliance is working to change that).

NORML board member Greta Gaines made some waves recently when she published an Alternet.org article titled "Why Are No Women Celebrity Stoners Willing to Come Out of the Greenhouse." Gaines got a few things wrong, dissing Melissa Etheridge as a mere medical marijuana advocate, and failing to recognize that women like Aniston, Sarah Silverman, Cameron Diaz, Kirsten Dunst and others have spoken publicly about their marijuana use. But if the MPP list is a reflection of public perception, her point is one that needs to be made.

Most are aware that women had a role in bringing about alcohol prohibition, but many don't know that they also helped bring it down. Pauline Morton Sabin was one important player who was highlighted in Ken Burns's PBS series "Prohibition." A panel at the national NORML conference on Saturday, October 6 will explore women's role in ending America's prohibitions. An NWA Luncheon will follow. Read more and register.

See a round-up of prominent female cannabis connoisseurs, now and then.
Posted by Tokin Woman at 8:20 AM No comments:

After saying that Ayn Rand was required reading for all his interns and his biggest influence for getting into politics, House Speaker Paul Ryan has now said he enjoyed Rand's novels but rejects her atheistic philosophy.

That's too bad, because Rand opposed drug prohibition, although she called taking drugs "suicide" and said marijuana "destroys the mind." At least, so says a web search.

According to the book Ayn Rand Answers by Robert Mayhew (Penguin, 2005) as quoted by OnTheIssues.org, Rand said,

"I do not approve of any government controls over consumption, so all restrictions on drugs should be removed (except, of course, on the sale to minors). The government has no right to tell an adult what to do with his own health and life. That places a much greater moral responsibility on the individual; but adults should be free to kill themselves in any way they want.

"I would fight for your legal right to use marijuana; I would fight you to the death that you morally should not do it, because it destroys the mind. What the government should do is protect citizens from the criminal consequences of those who take drugs. But drugs would be much cheaper if it weren't for government."

Rand can be heard on tape saying, "I think drugs should be sold openly because it is an individual's right to commit suicide if he wants to...If drugs were sold legally, that would put that whole underworld and all the drug addicts as pushers out of business." 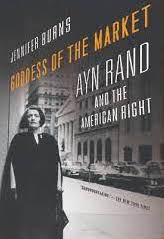 The Daily Kos quotes Wikipedia quoting Jennifer Burns's book Goddess of the Market: Ayn Rand and the American Right (Oxford University Press, 2009) with this tasty nugget: "While completing her second novel (The Fountainhead), Rand began taking the prescription amphetamine Benzedrine to fight fatigue. ... Her continued use of it for several decades also may have contributed to volatile mood swings observed by her associates in later years."

The Rand Watch blog explored the theme for a 2010 story, "Was Ayn Rand a Drug Addict?, which says,

"In addition to her indisputable addiction to nicotine (she was a chain smoker) there’s no question that Ayn Rand was a habitual consumer of amphetamines starting in 1942, when she was prescribed Benzedrine for weight loss (a common medical practice in that era) and discovered that it gave her the energy to put in the long hours needed to finish the first of her two major novels, The Fountainhead. Rand liked the boost that 'speed' gave her, and from that time until at least 1972 – a period of 30 years – she continued to use amphetamines, moving on to Dexedrine and Dexamyl."

Judging from the way they spun their lies in convention speech after speech, Republicans will have no trouble spinning away Ryan's admiration for that godless speed freak Ayn Rand with her wild ideas on everything but the economic policies that favor his tax bracket.

Rand also said, "I am certainly in favor of abortion...I'd like to express my indignation at the idea of confusing a living human being with an embryo...The idea of some bitches---and I don't apologize for that--trying to prescribe to all other women what they should do with their lives is disgusting. And they call it a right to life!" I'm guessing the GOP won't be adopting that moral stance either.

Burns appeared on The Colbert Report on August 29 and called Rand's writings "the gateway drug" for the New Right. Burns said the last thing Rand wrote was a denunciation of Ronald Reagan. Too bad Ayn's not around to give her opinion on Ryan. Tom Morello of Rage Against the Machine, a band who Ryan says he admires, has written an eloquent response in Rolling Stone. Wait until everyone from AC/DC to Led Zepplin have their say.
Posted by Tokin Woman at 10:27 PM No comments: 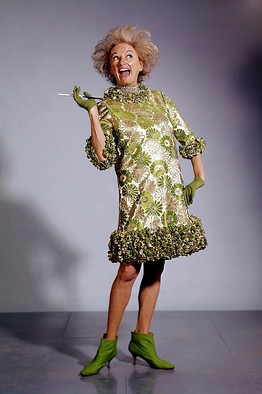 The world is mourning Phyllis Diller, who broke the gender barrier in stand-up comedy as a 37-year-old housewife and inspired new generations of female comics everywhere.

It's doubtful that Diller smoked pot. Born in 1917, she was from what George Will called "the Falstaff generation." She joked that for her health she drank a lot of water "and a lot of gin." In her New York Times obituary she is quoted about doing stand-up, "I don't want to sound like a doper, but it's a high."

Googling her name plus "marijuana" gives a surprising result: a strain of cannabis named "Phyllis Diller" is for sale at the Medical Marijuana Relief Clinic in Sherman Oaks. A sativa strain, I'm guessing it got its name because it resembles the shaggy hairstyle famously sported by Diller.

The torch has been passed to a new generation. Diller was remembered by her friend and protegée Joan Rivers on CBS This Morning. Rivers smoked marijuana on her reality show earlier this year and said back in the day she smoked it with Betty White, George Carlin, Woody Allen and Bill Cosby.

Another "domestic goddess" comedienne who admired Diller is Roseanne Barr. Barr was roasted on Comedy Central on Saturday, and joked that Obama could pry her medical marijuana out of her cold, dead hands. She had the last laugh as she ended her bit by singing, very well, lines from the National Anthem. Barr says in her book Roseannarchy that giving up the "herb of the goddess" in favor of pharmaceutical drugs contributed to her famously blowing the song. She is the Peace and Freedom party nominee for President in 2012, on a ticket with VP nominee Cindy Sheehan.

Among those "Tweeting" their admiration for Diller yesterday were VIPs Barbra Streisand, Whoopi Goldberg. and Bill Maher.

Posted by Tokin Woman at 8:27 AM No comments: