Women's Equality Day Honors The Struggle for Our Right to Vote 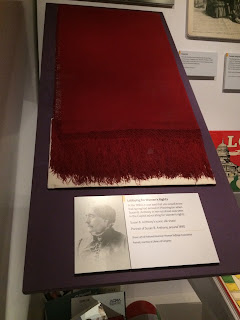 On Women's Equality Day, we celebrate suffragists Susan B. Anthony and Alice Paul.

It was once said in Washington that there were two signs of spring: the return of Congress to the nation’s capital and the sight of Susan B. Anthony’s red shawl as she also returned to lobby congressmen. I got to see the shawl (pictured) at the Smithsonian, just before NORML's annual Lobby Day in DC this year.

Born in 1820 into a Quaker family committed to social equality, Anthony collected anti-slavery petitions at the age of 17, and in 1856 became the New York state agent for the American Anti-Slavery Society. In 1866, she and Elizabeth Cady Stanton initiated the American Equal Rights Association, which campaigned for equal rights for both women and African Americans. They went on to publish a women's rights newspaper called The Revolution and co-founded the National Woman Suffrage Association. Source.

In 1872, Anthony was arrested for voting in her hometown of Rochester, New York, and convicted in a widely publicized trial. Anthony and Stanton first got an amendment for womens' suffrage introduced in Congress in 1878; it was not ratified as the Nineteenth Amendment to the U.S. Constitution until August 26, 1920, following countless campaigns.

Another key activist was Alice Paul, also a Quaker (and descendent of William Penn) who, along with Lucy Burns and others, strategized events such as the Woman Suffrage Procession and the Silent Sentinels, which were part of the successful campaign that resulted in the amendment's passage in 1920. As depicted in the Hilary Swank film Iron Jawed Angels, Paul and her compatriots staged a hunger strike after being imprisoned for protesting at the White House. She and others were force-fed using metal gadgets, leading to their moniker.

Susan B. Anthony became the first actual woman to be depicted on U.S. coinage when her portrait appeared on the 1979 dollar coin. Alice Paul was honored in 2012 on a $10 U.S. gold coin, and the U.S. Treasury Department announced in 2016 that images of Paul and Anthony will appear on the back of a newly designed $10 bill along with Lucretia Mott, Sojourner Truth, Elizabeth Cady Stanton, and the 1913 Woman Suffrage Procession that Paul organized. Designs for the new $5, $10, and $20 bills will be unveiled in 2020 in conjunction with the 100th anniversary of American women winning the right to vote.

UPDATE 3/2020: Following the election of Donald Trump, who has asserted that "no one respects women more than me," his treasury secretary Stephen Mnuchin held up the $20 bill that was to feature Harriet Tubman until after Trump leaves office. No more mention of the $10 bill that was to celebrate the 100th anniversary of women's suffrage can be found on the Treasury Department website.
Posted by Tokin Woman at 8:27 PM