Joan Rivers Outs Herself and Friends; Roseanne Barr Runs for Green Party Presidential Nomination on Pot Platform; Armie Gets Hammered: All on TMZ! 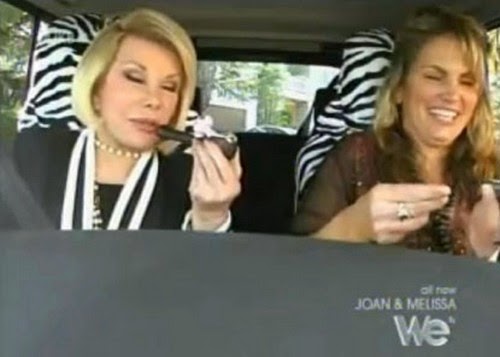 Ya gotta love TMZ and not just for its hot James Franco-ish surferdude. It's for the gang's potparazzi-style fascination with celebs and pot. Formerly TMZ outed Whoopi Goldberg as smoking pot before she accepted her Oscar, and Dyan Cannon for proffering pot brownies at Lakers' games.

In tonight's episode, Joan Rivers is accosted in New York, where she is asked about smoking pot on her television show Melissa and Joan. Toke of the Town strangely said it smelled like a publicity stunt when Joan tokes up in a car, saying she hadn't done so in 40 years.

But maybe Rivers was purposely making a statement. TMZ asked the comedienne who else she'd smoked with. "Oh, Betty White," she said, "George Carlin, Woody Allen, Bill Cosby...we had fun."

Rivers and Lily Tomlin where the two females picked to honor Carlin after, a few days before his death, he was awarded the Mark Twain prize for humor. That night, she said of Carlin, "We met in Greenwich Village, but we couldn't pinpoint the date because he was high on acid and I was totally wasted."

TMZ was a bit behind on their story about actor Armie Hammer (grandson of the oil scion Armand) being caught with pot baked goods in the same Texas town where Willie Nelson and Snoop Dogg were nabbed. On the red carpet at the Screen Actors' Guild awards Sunday night, the question put to Hammer by Access Hollywood was, "How did you manage to take a good looking mug shot?" the softest softball ever pitched. Not missing a beat, Hammer jokingly and sweetly answered the question “What you didn’t see is there was a makeup crew there.” He made no apology for entering the lofty triumverate, spending a night in jail to earn his badge of honor.

But wait, before the evening's out it's another scoop! Hitting on TMZ's website tonight is the breaking news that VIP Roseanne Barr has officially filed papers to run for president and hopes to carry the Green Party banner in the November election. They say,

"Barr says she's sick of Democrats and Republicans, whom she believes are not working in the best interests of the American people. So what, you ask, is Roseanne pushing? The answer is simple ... pot. She wants marijuana legalized and sold strictly domestically."

As of now, Barr is leading Romney in the online poll and isn't far behind Obama.

It's been quite a Candlemas. Let the quickening begin.
Posted by Tokin Woman at 6:03 PM