UPDATE: Clarkson has revealed that she was hospitalized during her "horrible" pregnancy due to severe nausea and vomiting. It's likely the star suffered from hyperemis gravidarum (HG), a debilitating ailment characterized by severe nausea and vomiting, malnutrition, and weight loss during pregnancy that afflicts 1-2% of pregnant women globally, including Princess Kate.

Since cannabis is the safest and most effective anti-emetic known to man, with a non-oral delivery system (smoking) that offers immediate relief, it would make sense to consider it a remedy for mothers with severe morning sickness. 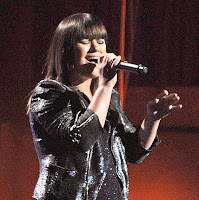 Not only did Superbowl XLVI feature the first female Very Important Pothead halftime performer, it also had original American Idol and Tokin Woman Kelly Clarkson belt out the National Anthem. Clarkson came through like a champ, winning favorable reviews over Christine Aguilera's performance last year, when she muffed the lyrics.

In 2007, Clarkson told USA Weekend magazine that she ate a marijuana cookie in Amsterdam. "It is legal there, and it is not legal here," she (somewhat erroneously) said. "I don't ever do anything illegal here," Clarkson added. "I have never smoked anything in my life. I've never tried any drugs. I wouldn't do anything that would cause holes in your brain or your nasal cavity. Call me Texan, but I don't think of marijuana like that."

Shortly thereafter, Blender magazine's August 2007 profile of Clarkson presented her as a bit of a rebel, documenting the Grammy winner's rift with 74-year-old BMG Chairman/CEO Clive Davis. "I can't stand it when people put out the same record over and over again," Clarkson told Blender. "Life is too short to be a pushover."

Advertised during the Super show (with spots that cost upwards of $3 million) was Anjelica Houston's new series Smash, involving the creation of a Broadway musical about Marilyn Monroe, premiering tomorrow on NBC. In a 2006 episode of Showtime's excellent series "Huff," Houston passes a joint to Huff, her psychotherapist colleague Hank Azaria, before guiding him on an MDMA/Ecstacy trip/therapy session.

Anjelica is the daughter of legendary film director John Houston. According to Lee Server in the Robert Mitchum biography, Baby I Don't Care, the elder Houston delighted Mitchum with tales of The Treasure of the Sierra Madre, during the filming of 1957's Heaven Knows Mr. Allison. Anjelica said of the classic 1948 film, shot in Mexico, "they were all smoking grass down there, high as a clouds for most of the picture." Marlon Brando said in his book Songs My Mother Taught Me that John "did a lot of heavy pot smoking" while filming Reflections In a Golden Eye, and got Brando high before filming a scene. But what we really want to know is, did Bogart bogart the joint?

In other Super spots, the Pepsi and Coke wars continue, with Coke's offering using the tagline, "Open happiness." Of course, the original forumulation for Coca Cola contained cocaine and the company reportedly still imports coca leaves for flavoring. Red Bull Coca, available in the US, Austria, Switzerland, Ireland, Italy, Russia and the UK, also contains "decocainized" coca leaf. Germany found traces of cocaine in the product (0.13 micrograms per can) and banned it in six states.

Budweiser premiered a nostalgic spot starting with a celebration of the end of alcohol prohibition and ending with the line, "Delivering great times since 1876." It was followed by an ad for Doritos, a product often associated with another kind of bud. Budweiser got double coverage when GE ran a spot highlighting the fact that their refrigerators keep beer cold (refrigeration not required for marijuana buds).

Howard Stern was featured in an ad promoting him joining NBC's "America's Got Talent." Stern admitted to youthful pot smoking in his book Private Parts and righteously has said he won't endorse any presidental candidate who isn't for legalization.

In a memorable spot, David Beckham models his tatoos and underwear to The Animals' song "Don't Let Me Be Misunderstood." In Eric Burdon's autobiography of the same name, The Animals' singer writes of visiting Mazatlan where, "I went into a rap about how the Mexicans had given the world two precious things--marijuana and beautiful women. The crowd loved it, but I don't imagine the Mexican authorities did." Burdon relates that he smelled his "first magical whiff of marijuana" with none other than Jack Teagarden at a Louis Armstrong concert. Teagarden was Benny Goodman's trombonist and inspiration for the song, "Texas Tea Party."

An ad for the new movie "G.I. Joe" begins, "In the immortal words of Jay-Z, 'Whatever deity may guide my life, oh Lord, don't let me die tonight.'" Jay-Z is so associated with the holy herb that days after his daughter was born, a strain named for her started appearing at LA cannabis clubs. The original 1945 G.I. Joe movie won an Oscar nomination for its hot young star, Very Important Pothead Robert Mitchum.

VIP Madonna made her halftime show entrance pulled by a legion of gladiators, like Elizabeth Taylor in "Cleopatra" (both probable pot smokers). It ended with "Like a Prayer" and the words "World Peace."

Betty White made a re-appearance in an ad, two years after the 80-year-old hit with the "You're playing like Betty White" Snickers ad. White was just outed by Joan Rivers as having smoked with her back in the day, when "we had fun." White's character on "Hot in Cleveland," which just won her another SAG award, smoked pot until it was explained away in Season 2.

And they call us the counterculture. Seems to me, we're a driving force. And that's just the first half of the game. Don't get me started about how the Giant Patriots who founded the US were all hemp farmers.