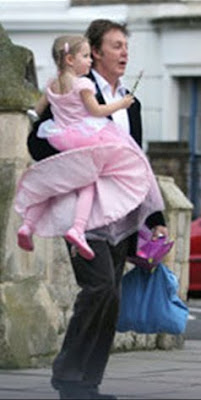 "At 69, Paul McCartney Swears Off Marijuana" the headlines ran. McCartney told Rolling Stone he'd given up the weed because of his 8-year-old daughter with Heather Mills, who he divorced just after she said she wouldn't tolerate his toking.

McCartney has just remarried, and he and Mills are back in divorce court. Although no journalist thought to ask, I'll bet Mills brought up the marijuana matter over child custody. Why do I think so? Because not a week goes by that I don't hear from a mother or father involved in a custody battle whose spouse brings up their pot use to get some leverage for themselves.

The revelation is key because McCartney has been about the highest (ha) profile proponent of marijuana legalization for decades. He helped pay for a July 24, 1967 advertisement in the London Times that called for legalization of pot possession, release of all prisoners on possession charges and government research into marijuana's medical uses. (Other signatories included VIPs John Lennon and Francis Crick, co-discoverer of DNA.) He told RS he's still for legalization, and is "a bit surprised" that it hasn't happened yet.

So perhaps by making this public statement McCartney's parental rights will be protected, but what of countless others who aren't so lucky? What effect the breaking up of families has on the children we're all supposed to be fighting this drug war about is unknown.

Meanwhile, Redbook magazine has an article in its current issue titled, "Pot Parents" that explains, through experts and parents, that those who are accustomed to the effects of smoking are no more dangerous to their children, even in an emergency, than parents who think nothing of having a beer while babysitting. Charles Sophy, medical director of the County of Los Angeles Department of Children, told Redbook, "Every day he sees parents who have underestimated the repercussions of smoking pot — in rare cases, he's seen children sent to live with relatives."

Hear this and weep.
Posted by Tokin Woman at 7:41 PM