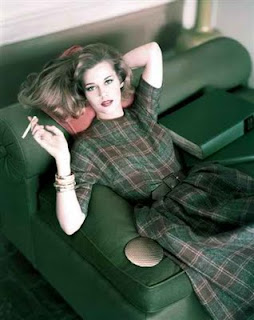 On Jay Leno's show (March 15), "Glee" star Jane Lynch chatted about the Vanity Fair post-Oscar party at the Sunset Towers, where everyone looked good but were boring to talk to. "I ended up in a corner somewhere, and somebody lit up a marijuana cigarette," Lynch said. After the partiers sat at her table, "and all of a sudden everyone's saying, 'Jane's got pot!"

"I don't smoke I don't drink and I'm writing a book about how I don't do those things," Lynch explained, while chuckling about the incident with a non-shocked Jay. "It was being smoked around me, and I stopped breathing, I didn't inhale."

Turns out, it may have been a different Jane who did the inhaling.

Gatecrasher at the New York Daily News reports of the party:

"During one trip to a bar in the back of the tent, we recognized the familiar aroma of marijuana, and then caught sight of 'Easy Rider' star Peter Fonda standing in the corner with his sister’s boyfriend, music producer Richard Perry. Inches away, Jane Fonda (seated next to 'Glee' star Jane Lynch) used one hand to shield her mouth while puffing what looked like a handmade cigarette.

"At a nearby bar, Catherine O’Hara and Martin Short stood chatting. O’Hara reportedly grinned and asked, 'Do you smell the weed? We’re blaming it on Peter Fonda'.”

Peter Fonda, of course, produced and starred in Easy Rider, in which Jack Nicholson played an innocent trying pot for the first time. Jane played a similar role in 9 to 5, as a divorced woman empowering herself in more ways than one.

"You don't mind if I turn on, do you?" Fonda (pictured) asked Rex Reed before puffing some of "the real thing" on New Years Eve, 1969, the day she found out she won a NY Film Critics Award for her performance in They Shoot Horses, Don't They? "Hey, it's no secret that I've smoked pot," Fonda wrote in her 2005 autobiography My Life So Far.

Nicholson criticized America's War on Drugs in a recent interview with a British newspaper, and said he still smokes pot. "I don't tend to say this publicly, but we can see it's a curative thing," Nicholson told the UK's Daily Mail.
Posted by Tokin Woman at 9:58 AM