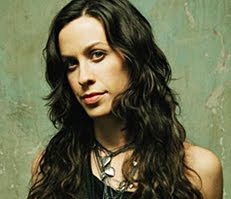 In honor of Women's History Month, Very Important Potheads has added profiles of several female conoisseurs to its website, including musician Alanis Morisette (pictured) and VIP of the month Isabelle Eberhardt. Also honored as VIPs are Susan Sarandon, Cameron Diaz, and Lady Gaga, joining 65 other profiles of Marijuana Mamas published on the site.

Lady Gaga's remarks on 60 Minutes before this year's Grammy awards echoed Morisette's when she told High Times magazine in 2010, “As an artist, there's a sweet jump-starting quality to [marijuana] for me...So if ever I need some clarity... or a quantum leap in terms of writing something, it's a quick way for me to get to it.” The singer/songwriter/actress also told Runner's World magazine of the clarity-bringing properties of a good run, which is interesting because the New York Times has just published a summary of studies that indicate that cannabinoids, not endorphins, are responsible for the so-called "runner's high."

The recently discovered Isabelle Eberhardt was born in 1877, the illegitimate daughter of a Russian noblewoman and her children’s anarchistic tutor. Raised to be an independent thinker, her short but eventful life proved she was. At the age of 20, she left France for Algeria where she smoked kif, embraced Islam and picked up a sword to join a revolt against French colonialists in 1898. Dressed as a man, Eberhardt explored the region, sending dispatches in the form of crystalline short stories like “The Seduced,” a heartbreaking tale of a young Arab who joins the army and returns to see his family's land usurped. A compilation of Isabelle Eberhardt's stories and reviews of her work, Departures, is published by City Lights (San Francisco).

Very Important Potheads.com, which profiles over 200 prominent cannabis consumers from history to the present day, is celebrating its 10th year of publication in 2010. Last year, its blog won a Top Marijuana Blog award from Onlineschools.org, and its author Ellen Komp was nominated for a Jack Herer award for Outstanding Hemp Awareness in Journalism. VIPs has merged its blog with TokinWoman.blogspot.com and is focusing on the female.

Read more and see a list of famous female marijuana users with links.
Posted by Tokin Woman at 8:50 AM