Johnny Depp Admits to Initiating His Daughter with Marijuana

Lawyers for the UK tabloid The Sun are trying to smear Johnny Depp as a bad parent who "encouraged" his 13-year-old daughter to smoke marijuana during a trial brought about by Depp's $50-million libel suit against the publication for calling the actor a "wife-beater." His former wife Amber Heard has alleged that Depp was abusive during their 15-month marriage, which he has denied, claiming that he was the victim of domestic violence in their relationship.

Asked about his own cannabis use during his marriage to Heard, Depp said it was "very helpful with regard to anxiety, sleep, sense of well-being, calmness," according to Metro UK. He was then asked by attorney Sasha Wass if that was why he "encouraged" his daughter Lily-Rose Depp to try weed when she was 13.  Depp replied that he never encouraged his daughter to try cannabis, but told her if she wanted to try it to come to him instead of trying it elsewhere.

"My daughter was 13 years old and, as we all know, at 11, 12, 13 years old, when you go to high school parties you are approached by people who will want to give you drink because they’re drinking," Depp said on the stand. "They are doing cocaine at 12 and 13, they are smoking marijuana at 12 and 13, they are taking ecstasy at 12 and 13. You don’t want your 13-year-old going into some paranoid tailspin and I knew that the marijuana I had myself, that I smoke myself, is trustworthy, is a good quality and I was bound and determined not to have her try any drugs out there in the world because it’s too dangerous."


"Please do me the honor of coming to me when you are ready, when you really feel you are ready, because I don’t want your first experience in this world to be with people you don’t know, taking things you don’t know that I can’t trust, so it’s a safety issue," Depp said he told his daughter. He recalled how Lily-Rose later came to him and said she was "ready" and he consulted with her mother Vanessa Paradis, with whom he had a 14-year relationship and two children.

When his daughter emailed afterwards to say, "I love weed," Depp replied, "Don’t be loving it too much just yet" and added: "So proud of you for being so responsible." Studies show that the human brain is still developing into our 20s, and smoking too much marijuana  in the teen years can be harmful.

Depp has good reason to want to warn his children away from unknown or hard drugs, or alcohol. In 1993 his friend River Phoenix died of “Acute Multiple Drug Intoxication” at the age of 23 outside The Viper Room in Hollywood, when the club was owned by Depp. The three-time Oscar nominee said in a 2008 interview that he had "poisoned" himself with alcohol "for years" and announced he quit drinking in 2013. Apparently he went "California sober" because a Rolling Stone interviewer said in 2018 Depp smoked hashish in his presence.

Wass also asked Depp if it was true that he "found drugs and alcohol" early in his life, BBC reports. Depp answered, "My mother used to ask me to go and get her 'nerve pills' and I think I was around the age of 11 that it dawned on me that 'nerve pills' were calming her nerves, so I brought her her nerve pills and I took one and that began [my drug use]." Sounds like he shared the less harmful drug with his daughter. 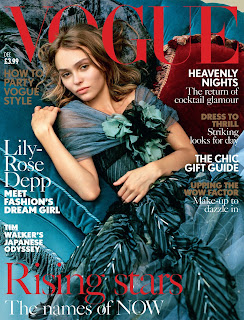 Lily-Rose Depp, now 21, has won several acting awards, including best actress at the 2019 Los Angeles Film Awards. She had a successful modeling career, conquered anorexia, and acts in both English and French. She appears to smoke a joint with Natalie Portman in a bathtub in the 2016 film Planetarium, and she's appearing in the "opioid crisis thriller" Dreamland in 2020.

Modern spiritual leaders and scientists have lamented the loss of adolescent initiation rights in our society. Ram Dass wrote, "Sadly, a first psychedelic experience is much more likely to happen at a noisy party somewhere than in a sacred setting filled with reminders of spirit. And that’s a big missed opportunity, for us as a society." Robert Carhart-Harris of the Centre for Psychedelic Research at Imperial College London is currently recruiting participants in a clinical trial studying psilocybin therapy for anorexia, as is the Johns Hopkins Psychedelic Research Center. The spiritual bereftness of our rites of passage and our society arguably leads to a disconnectedness with each other and with nature that could have profound effects not just on individuals, but even on the future of our planet.

Other actors whose parents initiated them into cannabis, or got high with them, include Matt Damon and Mark-Paul Gosselaar. Recovering addict/actor Dax Shepard recently said he will tell his daughters, "to do shrooms and to smoke pot and to drink and to just don't do cocaine or opioids."Paul McCartney announced he was giving up marijuana in 2012 during a child-custody battle with his second wife Heather Mills. Expected to testify next week in support of Depp are Paradis and his other ex Winona Ryder, who smoked pot on film with her elders in How to Make an American Quilt.

UPDATE 7/15: An employee of Heard's said on the stand the actress drank as much as two bottles of wine nightly and was "incoherent and abusive"; someone who worked for Depp said he only did cannabis and was "always polite."