How To Make An American Pot Party 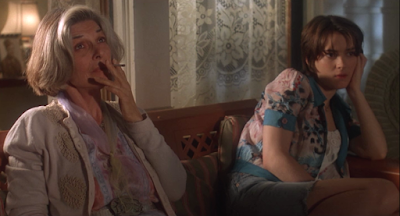 After I gave a slide show presentation titled, "Women and Cannabis: A 4000-Year Herstory" at the First Annual Cannabis and Healing conference for women in Wilton, California, a lovely lady came up to me and said that the women spoke pot in the movie How to Make An American Quilt. It's true, both in the book and the movie, which takes place in a town called Grass, California.

"Sometimes in motel rooms between their children’s homes, Glady Joe and Hy drink whiskey and smoke a little reefer. It is their secret. They say it helps them sleep better in strange beds. They buy it from a grandchild in graduate school, a young woman named Finn Bennett-Dodd. Who has promised not to betray them to her parents or the other relatives. Finn understands that, more than the fact that pot is illegal, it upsets people when two elderly grandmothers indulge in this private ritual."    ---Whitney Otto, How To Make An American Quilt 1991 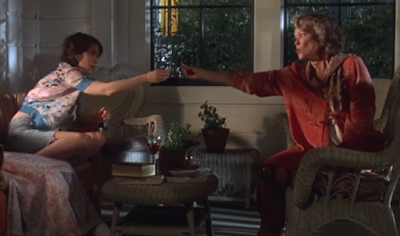 In the movie, sisters Glady Joe (Anne Bancroft) and Hy (Ellen Burstyn) smoke a joint on the porch with their grandniece Finn (Winona Ryder) after she arrives for a visit. They start talking about family secrets, and Finn asks: "Was it a mistake, letting you two smoke?"

This leads to giggles.

Bancroft is bogarting badly when Burstyn reaches over to ask for a toke. After she has hers, she's able to tell her story. Finn, who's come to do a master's thesis on her quiltmaking relatives while deciding whether or not to get married, gets a lesson in life at the quilting bee. A rare appearance by Maya Angelou as the master quilter is a treat; Lady Jean Simmons appears as Em and Lois Smith has a pivotal role as Sophia.

Bancroft originated the role of Hellen Keller's teacher Annie Sullivan on Broadway in The Miracle Worker and was unforgettable as Mrs. Robinson in The Graduate. She brought class to everything she did, from The Naked Street (1955) to The Turning Point (1977) to the Queen Bee in Antz (1998). She finally worked with her wonderfully incongruous husband Mel Brooks in To Be Or Not to Be (1983), which is not to be missed. 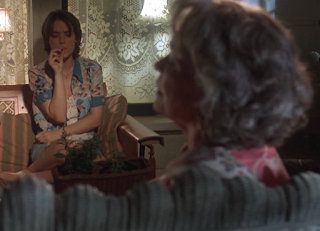 Burstyn is no slouch either: she was great in Alice Doesn't Live Here Anymore, but never got good roles (The Exorcist? really?). She is down on drugs of any kind in her autobiography, saying they messed up a friend, and made the dismal Requiem for a Dream about a drug addict. She, and most of us, don't seem to understand there's a world of difference between a joint on the porch and holes in your brain.

Ryder, who played Jo in Tokin' Woman Louisa May Alcott's Little Women, always does interesting projects, like A Scanner Darkly and her work with Pacino (Looking for Richard and Simone).

UPDATE 8/16: Ryder is getting rave reviews for her role in Netflix's Stranger Things and is all the rage again with a generation that grew up on Beetlejuice and Heathers. Netflix is also airing American Quilt.