You preach to me of laws, you tie my limbs
With rights and wrongs and arguments of good,
You choke my songs and fill my mouth with hymns,
You stop my heart and turn it into wood.

...Age creeps upon your timid little faces
Beneath each black umbrella sly and slow,
Proud in the unimportance of your places
You sit in twilight prophesying woe

So dim and false and grey, take my compassion
I from my pageant golden as the day
Pity your littleness from all my passion
Leave you my sins to weep and whine away!

The daughter of famed English actor and impressario Sir Herbert Beerbohm Tree, Iris was a free thinker and sybarite from an early age. In 1912, at the age of 15, she went to Milan where her sister Viola was studying singing. From there, she wrote to a friend: "I am rather a success here; my hair is admired...I am trying to keep as pure as possible but it's rather difficult. I am in love with a beautiful Italian called Ludovici who gives me lessons in the language on a crimson sofa."  A few weeks later she wrote, "I am having a glorious time, living a somewhat bohemian life and eating bohemian spaghetti....I want to do so many things and of course I shall end by doing nothing. Women never do anything except spoil the lives of men - that is their only consolation."

Back in England at the Slade school the following year, she and her friend Nancy Cunard secretly rented a studio where they "gave clandestine feasts and talked through the night by the light of guttering candles, reading poetry aloud and smoking cigarettes." (The Rainbow Picnic, Daphne Fielding, 1974) "Forbidden playgrounds were investigated..They drank beer in public houses and wine at the Cafe Royal."

At 17 she met her lifelong friend, Welsh poet and "King of the Bohemians" Augustus John at one of Lady Ottoline Morell's Thursday gatherings.  In an unpublished essay, In Praise of Augustus John, she wrote, "At Ottoline's there were all kinds of dress-ups. Her rooms were scented with pomanders, pot-pourri and packed with genii in full cry....John's basso profundo muttering rare but penetrating sentences...At first meeting I experienced an immediate intimacy as if I was part of his landscape which has remained in my vision ever since. "

Tree traveled with her father to Hollywood in 1915 (as revealed by Oscar Levant in his book The Uninportance of Being Oscar). Levant called her "a charming and witty woman." Meeting her first husband Curtis Moffat in New York in 1916, he "looked like a prentice wizard of magus out of a fairy story, especially in the black cloak he habitually wore at night when he took her out to explore the more raffish quarters of the city: the Bowery, Harlem, Greenwich Village and the dockside." (Fielding)

In his memoir Chiaroscuro (1952), John writes of taking hashish jam supplied by Princess Violette Murat at a dinner party at the Moffats' home in Hampstead:

Having helped myself to the first dose I had almost forgotten it when, catching the eye of Iris Tree across the dinner table, we were both simultaneously seized with uncontrollable laughter about nothing at all. This curious effect repeated itself from time to time throughout the evening.

Iris may have written of the event, or a similar one, in her poem:

Suddenly
Shutting our lips upon a jest
As we are sipping thoughts from little glasses,
A gun bursts thunder and the echoing streets
Quiver with startled terrors... 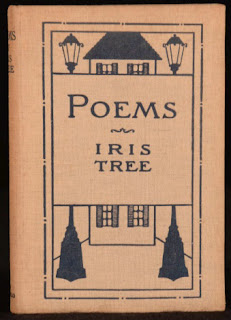 Much of Tree's poetry of the time deals with the horrors of WWI, juxtaposed against the wild and free bohemian life she was living, still railing against the bourgeoisie:

You have never known
Delight of dying slowly,
Poisoned with raptures...
Nor felt your souls go blowing like balloons
Tossed by impulsive hands...
You have not felt the abandon
Of light love
Dragged by the hair across a slippery floor...

Contrary to her youthful assessment of women's worthlessness, Tree accomplished much in her life, as well as writing remarkable poetry and acting as muse and model to other artists.  She came to America to act in Max Reinhardt's play The Miracle in 1925, and there met her second husband, Friedrich Ledebur. The two roamed around California, gypsy style, with their son, then moved back to Europe where they were involved in the Chekhov Theatre Studio.

Around 1940 Tree relocated to California and rented a house in the Ojai Valley, the Shangri La where the movie Lost Horizon was filmed.  There she attended lectures by Krishnamurti, and along with him, Aldous Huxley and others, founded The Besant Hill School near Ojai.

Tree also established the Ojai theatre festival, where she played Lady Macbeth and "gave a magnificent performance, even though her stage fright was immeasurably increased by the presence in the audience of her friends Lillian Gish, Charlie Chaplin and Greta Garbo." She and other members of the Chekhov studio performed her play Second Wind.

Tree owned an apricot ranch for a time, acquired a barn by the sea on an estate once owned by Robert Louis Stevenson, and once took up residence in an apartment built over the merry-go-round on the Santa Monica pier.  She appeared in the 1956 film version of Moby Dick in which Ledeber played Quequeg. She also appears in a cameo, reading poetry as herself, in Federico Fellini's La Dolce Vita (1960).

The early 1960s found Tree living in Geneva with her son, where she hosted the Huxleys and followed Krisnamurti. Like Huxley, she lost many of her personal papers in California. "Another link between Iris and Aldous Huxley was that she too had taken mescalin," wrote Richard Morphet of the Tate Gallery. Her biographer Daphne Fielding describes encountering Tree in France where she tried a hallucinogenic mushroom said to produce "beatific visions in glorious Technicolor." Fielding claims Tree didn't really how to ingest them, but the chapter ends with someone suggesting she'd gone to the Pyrenees because, "Maybe it's good mushroom country."

At the end of her life Tree was forbidden to indulge in cigarettes, coffee and wine for medical reasons. "I feel a traitor," she said "abandoning Baccus the Mind-Shaker and Ganymede the Cup-Bearer." She died in England in 1968, her last words being, "It's here, it's here... Shining...Love...Love....Love."