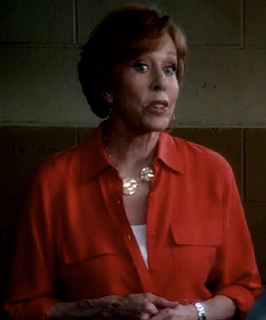 Explaining to her nephew why she ended up in the slammer, Burnett's character says, "I needed some grass. How was I to know the guy was a narc?" She had to go to the street, she says, when "Those fascists at the dispensary wouldn’t take my card." [This is a problem for out-of-state medical marijuana users: their own state's cards aren't usually honored elsewhere.]

A subplot on the show had President Obama visiting the island for Thanksgiving; a joke about "the days of Strawberry Fields" followed.

Compounds in marijuana have been shown to kill brain tumor cells without negatively impacting the surrounding healthy cells.

It might be Burnett's most controversial TV appearance since Friendly Fire, the 1979 drama in which she played a woman whose son is killed by friendly fire in the military.

It's interesting that she would take the role of a marijuana user, because she released a memoir earlier this year about her eldest daughter Carrie Hamilton, who's widely reported to have been addicted to marijuana, cocaine and quaaludes, starting in her teens.

Hamilton died of lung cancer in 2002, at the age of 38. Around 1978 she was a pot smoker, according to a 1979 People magazine story. A study in the American Journal of Public Health concluded, "In March 1978, 13 (21 per cent) of 61 marijuana samples from the southwestern United States were found to be contaminated with the herbicide paraquat, a pulmonary toxin, in concentrations from 3 to 2,264 parts per million. The source of the contamination was an aerial spraying program in Mexico, supported indirectly by United States funds."
The CDC's website says, "If it is inhaled, paraquat could cause poisoning leading to lung damage. In the past, some marijuana in the United States has been found to contain paraquat." (No mention of the US Government's role in spraying paraquat.)
Friendly fire, indeed.

Burnett was deservedly awarded the Mark Twain Prize on a ceremony that aired tonight. (Twain was observed to be under the influence of hashish in 1865.)