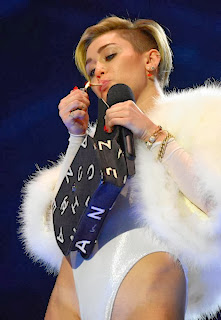 How can a girl get attention these days in the media meatgrinder Penthouse once depicted on its cover? When a young woman has to resort to licking and riding construction equipment in the nude so that we'll listen to her song, it's our society that's really reached a new low.

You can't blame Miley Cyrus for needing to compete with the hired nude girls in Robin Thicke's idiotic "Blurred Lines" video, and you gotta admit she came in like a wrecking, twerking ball to take Thicke out, even casting a female dwarf as him in her performance last night at the European MTV awards in Amsterdam.


To cap it off, after winning "Best Video" for "Wrecking Ball," Cyrus pulled a joint out of a Chanel bag and lit it onstage -- and no one was talking about anything else. (TMZ has the unedited and edited-for-the-US nonsmoking version.)

Cyrus's blunt move out doobed Lady Gaga, who smoked onstage last fall at her concert in Amsterdam, saying, "It has totally changed my life and I've really cut down on drinking. It has been a totally spiritual experience for me with my music.”

But just when we were celebrating the reality that women could come out of the cannabis closet without repurcussions to their careers or personal lives, Gaga labeled herself as addicted to pot, grabbing back headlines she hasn't enjoyed exiting her egg.

How to get attention, ladies? Like Joni Mitchell did, or Grace Slick, or Chrissie Hynde: With talent and hard work. Let's stop watching our music on YouTube and open our ears and hearts to the sound again. We've got a lot more to fix than the pot laws.

UPDATE 12/7/2013 - Gaga's views on marijuana are getting as hard to keep up with as her fashion statements. She now says smoking pot makes her feel 17 again. What could be wrong with that?