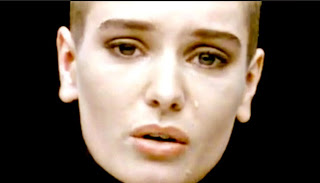 Sinead O'Connor has been in the news after penning an open letter to Miley Cyrus, after hearing that Cyrus cited O'Connor's video for "Nothing Compares 2U" (pictured left) as an influence for her wrecking ball video.

The Irish songstress warned the younger singer that the music industry "will prostitute you for all you are worth, and cleverly make you think its what YOU wanted.. and when you end up in rehab as a result of being prostituted, ‘they’ will be sunning themselves on their yachts in Antigua, which they bought by selling your body and you will find yourself very alone." 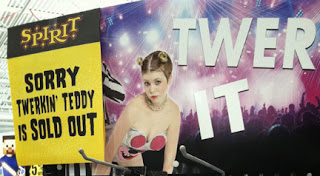 Cyrus, BTW, was spotted smoking a blunt at a Halloween party, where presumably she was the only young woman not wearing a Miley Cyrus twerking get up.

O'Connor once said that dealing marijuana was one of the most honest professions a person can have. Now it seems the lack of a legitimate dealer has lead to the quick break up of her latest marriage, to drug counselor Barry Herridge, after only 16 days.

On her blog, she blamed the late-2011 split on taking her husband on what she described as "a bit of a wild ride" looking for marijuana on her wedding night, as she does not drink. After the street dealer she found handed her a bag of crack instead, her hubby freaked out.

O'Connor recently said she hides her pot smoking from her younger children by smoking it in the garden, and that she worried her older child would get arrested for pot, "which is what happened."