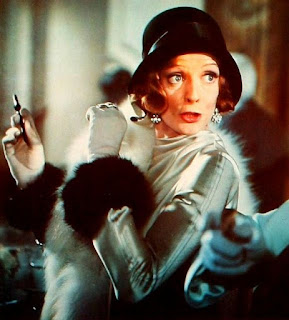 I finally viewed the 1972 adaptation of the Graham Greene novel Travels with My Aunt, starring Maggie Smith, now known as the dowager duchess from Downton Abbey.

The story begins with a young paramour of the mysterious Aunt Augusta (Smith) hiding his pot stash in an urn of ashes following a cremation. A madcap voyage ensues, during which Augusta and her nephew, the staid bank manager Henry, encounter a young woman named Tooley on the Orient Express.

Tooley is played by Cindy Williams, the year before she appeared in American Graffiti. Tooley offers Henry some cigarettes that turn out to be pot, and the experience opens his mind and heart. 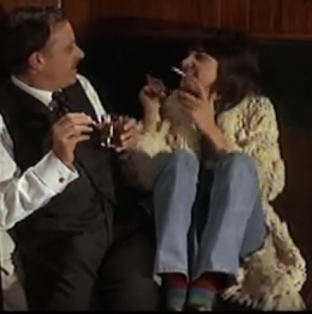 Williams is super in the role, from a time when, like in Graffiti, a new realism was seen in cinema. She went on to be paired with Penny Marshall as a writing partner, leading to a guest shot on "Happy Days" and their spin-off "Laverne and Shirley" (1976-1983). The show has a 1981 "lost episode" titled "I Do, I Do" in which the girls get stoned on pot brownies.

David Lander, who played Squiggy on "Laverne and Shirley," was an MS sufferer and advocate for medical marijuana who said he and his partner Michael McKean (Lenny) created their characters for the show while high. Lander told producer Garry Marshall that instead of patrolling the halls during the show he ought to put marijuana in the budget. 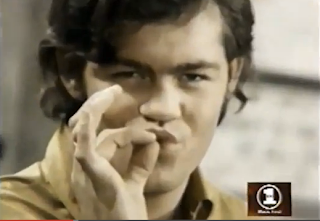 Sixties TV icons The Monkees were also pot fans. A "Behind the Music" episode reveals that Peter Tork, considered the best musician in the band, was busted for $3 worth of hash he had on him when crossing the US/Mexican border and did three months in jail for the "crime" in 1972.  Meanwhile drummer Micky Dolenz was admittedly partying hearty, talking about being stoned and demonstrating what he meant by that (see left).