In his memoir Chiaroscuro (1952), Welch painter and "King of the Bohemians" Augustus John described a 1920s dinner party at the home of photographer Curtis Moffatt, "a bit of a sybarite" who married poet Iris Tree:

When he lived in Hampstead, Curtis used to give small parties at which sardines and wine were consumed -- and sometimes hashish. I had already tried smoking this celebrated drug without the slightest result. It was Princess Murat who converted me. She contributed several pots of the substance in the form of a compôte or jam. A teaspoonful was taken at intervals. Having helped myself to the first dose I had almost forgotten it when, catching the eye of Iris Tree across the dinner table, we were both simultaneously seized with uncontrollable laughter about nothing at all.

...The crises of laughter continued with some of us till dawn, with further repercussions as I made my way home with Violette Murat, who had only been slightly amused by the night's proceedings.

Violette Murat, who turned John onto hashish, was a Bonaparte princess who may have been a lover of Marie Laurencin. The book Cote D'Azur - Inventing The French Riviera includes the following insight into the lifestyles of the rich and famous in the 1920s: “Princess Violette Murat, friends say, not only bought her opium in Toulon, but also rented a submarine in order to smoke it in peace."

Murat is described at another famous dinner party in 1922, where VIP Marcel Proust met James Joyce and Stravinsky: "Princesse Violette Murat flounced out of the party, looking daggers at [Proust] as he arrived. Gossip about her meanness was rife, and she was mortally offended by rumours that one of Proust’s particularly parsimonious characters was based on her. With her strange lack of physical proportions, he once said of her 'She looks more like a truffle than a violet.'"

The Napoleonic family is large and convoluted; everyone has five names, with repetitious family names like Eugene. I've uncovered conflicting information about Murat but I think she is Violette (aka Cecile) Ney D'Elchingen, born September 9, 1878. Granddaughter of Napoleon's marshall Michael Ney, she was the wife of (Eugene) Joachim Murat (1875-1906), a descendant of the Joachim Murat (1767-1815) who married Caroline Bonaparte, Napoleon's sister. Violette died in Paris on July 19, 1936.

Along with VIP Tallulah Bankhead, Murat was part of the Harlem renaissance in the 1920s. Berenice Abbott, who photographed (Eugene?) Murat (shown), wrote of her, “A very high liver. Oh, all kinds of wonderful tales are told about her….She…knew how to make an art out of living and that’s something stupendous. Anything she did became a vibrant, extraordinary event. I can remember seeing her go into a ten-cent store and buy the place out and have a fling doing it.”

NOTES: The 100th anniversary of the publication of Swann's Way, Proust's first volume in A la recherche du temps perdu (aka "In Search of Lost Time") November 14, 2013, will be celebrated the world over.

Born on November 13, 1913 in Paris, Princess Laure Louise Napoléone Eugénie Caroline Murat was a cousin of Violette Murat. In 1939, she married Fernand Auberjonois, a journalist who worked as a foreign correspondent for the Pittsburgh Post-Gazette and the Toledo Blade as well as NBC and Voice of America. The couple's son, actor Rene Auberjonois, is best known as Father Mulcahy in the movie M*A*S*H. 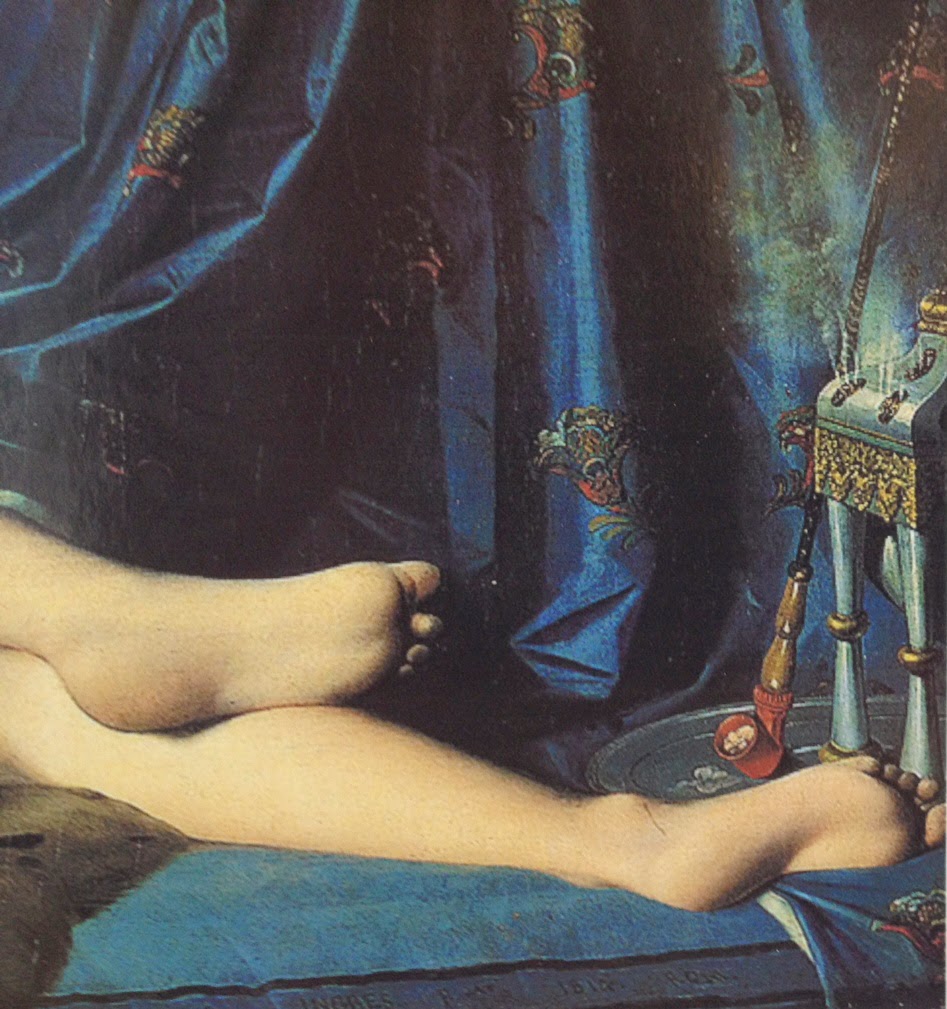 UPDATE 3/15 - Just discovered: Tucked in the corner of La Grand Odalisque by Ingres (1814)—a painting commissioned by Violette's grandmother and Napoleon's sister Caroline Bonaparte Murat—is what looks like a hash or opium pipe, along with what looks like an incense burner (complete with smoke). The fan the girl holds looks rather like a hookah mouthpiece.

The painting was “widely criticized” when it appeared, supposedly for the elongation of the girl’s figure (which almost looks like a grand pipe itself, with a big-ass bowl).