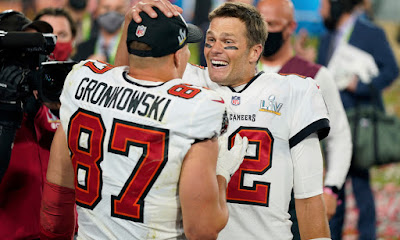 An Inside Edition story reveals that 43-year-old quarterback Tom Brady's health regimen includes a daily blueberry breakfast shake with two key ingredients: hemp milk and hemp seeds. Hemp seeds (and the milk from which they're made) are complete proteins, containing all the essential amino acids with the perfect proportion of omega-3 and omega-6 oils, plus hard-to-find ones too.

Brady and his wife Giselle speak about their commitment to regenerative agriculture in the the documentary "Kiss the Ground," narrated by pot-lover Woody Harrelson.

Unstoppable receiver Rob Gronkowski, who followed Brady from the Patriots to Tampa Bay and scored the first two touchdowns in Sunday's game, announced in 2019 he was investing in a CBD company. Gronk said at the time, “I am here today to appeal to the sports governing bodies of the world to update their positions on CBD.”

As in other years, pot lovers entertained us at the big event, which was viewed or streamed by 96.4 million people, according to CBS. After HER called God a man in "America the Beautiful" (weird, though beautiful), country music star Eric Church dueted with Jazmine Sullivan on "The Star Spangled Banner."

Church's beautiful baritone can also be heard on his song, "Drink a Little Drink, Smoke a Little Smoke."  He told Men's Journal, “I do more of the edibles now just because the smoking part sucking for me vocally. I mean, it’s one of those things I’m not ashamed of. It’s something I enjoy. It’s escapism. I do it responsibly.”

Jett posed smoking a joint for Rolling Stone in 2015.  "Of course I smoke pot," she told High Times, adding she found the high-CBD balms the magazine sent her "useful, very useful." She then spoke of cannabis's help with head injuries, one reason sports stars are pushing for its use.

Finally and fittingly, Doritos debuted their new 3D chips in a Superbowl ad with Matthew McConaughey, who made a splash in the pot-friendly film Dazed and Confused and was caught with pot while playing bongos naked in 1999.
Posted by Tokin Woman at 9:45 AM