Miley Cyrus: Marijuana is My First and True Love

UPDATE 12/18: Miley now says her mom got her back into smoking, and that she does it once in a while (but not while working).

Miley Cyrus, who has famously taken a break from smoking weed, was asked about her hempen hiatus on Jimmy Kimmel's show last night. The exchange went like this: 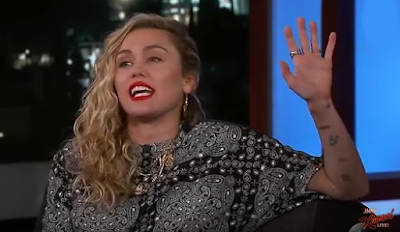 Kimmel: "You are no longer smoking I understand."

Kimmel: "Now that it's legal here in California, you've decided...."

Kimmel: "Why aren't you smoking anymore?"

Cyrus: "Because I am very focused on what I'm working on right now." (Apparently that's either on designing clothes and shoes for Converse, or being back together with Liam Hemsworth. You can hardly blame her for the latter.)

She raised her hand as though taking an oath when she added:  "I also think it's the most magical, amazing...it's my first and true love. It's just not for me right now at this time in my life, but I'm sure there will be a day I will happily indulge. "


Cyrus also talked about feeding her pig Doritos, and revealed that her Grandma unknowingly baked Snoop weed brownies (via CG) before the VMA awards last year. She says that her "favorite thing in the world" is to smoke pot and play UFC video games, adding, "It's not very productive." Apparently, the addictive thing in Cyrus's life was the video games.

Miley took a selfie with Kimmel's other guest, Senator Elizabeth Warren, who has been crafting a bill with Republican Sen. Cory Gardner to give states the power to fully legalize marijuana.

As another May Day present to potheads, California Senator Dianne Feinstein, who has assiduously refused to support even medical marijuana 22 years after her state voted to legalize it, has finally said she supports keeping the federal government out of California's business. The fact that she was unable to win her party's endorsement in her re-election campaign against the more progressive Kevin de Leon is considered to have been a factor in her sudden enlightenment. Had Feinstein made the announcement on April 1, it would have been more believable.
Posted by Tokin Woman at 7:49 PM