Gayle King, guesting on The Ellen Show, mimed smoking pot when the subject of Ellen's recent birthday party came up. Turns out the party smelled strongly like pot, and although Ellen said she doesn't like smoking it, she joked that her writers have it on hand. It had come out that Amy Schumer told King at the party that she wants to get her high, and King says she's planning to try it.

King also said she wasn't telling tales out of school when she told Ellen that Oprah "has smoked a little marijuana too." 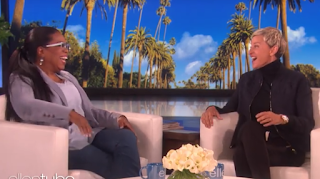 In a separate interview on the show, Oprah herself declared Ellen's pot-infused party "the most fun I ever had. I don't even know what happened to me." I wonder if she got a contact high (at least).

Oprah told Andy Cohen on Watch What Happens Live in 2013 that she hadn't smoked since 1982, but would be willing to "hang out" with him after the show, because "I heard it's gotten better."

It's been reported that the cannabis-infused tea company Kikoko has been covered in O Magazine. 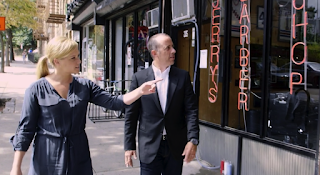 Watching Schumer's new film I Feel Pretty is as much fun as going to a party (though there is no pot smoking in it). Schumer picked out a pretty pink bong in a headshop window during her appearance on Jerry Seinfeld's Netflix show "Comedians in Cars Getting Coffee."
Posted by Tokin Woman at 7:08 PM