The United States vs. Billie Holiday: How The Drug War Can Silence Political Speech

The United States vs. Billie Holiday, now showing on Hulu, depicts how Holiday was targeted by the US government for her drug use due to her politics, in particular because of her refusal to stop performing her song "Strange Fruit" about lynching.

Starring Andra Day in a powerhouse, Golden Globe–winning performance, the film has the questionable casting of the handsome Garrett Hedlund (who played Dean Moriarity / Neal Cassidy) as the hideous (inside and out) Harry Anslinger, the careerist anti-drug zealot and longtime head of the Federal Bureau of Narcotics who took down Holiday over her heroin use.  Very Important Pothead Louis Armstrong makes an appearance or two in the movie, and Tokin Woman Tallulah Bankhead is also depicted, as being questioned by Anslinger about her relationship with Holiday.

Just after Holiday is shown singing Bessie Smith's song "Give me a Pigfoot/Reefer" we see Very Important Pothead Lester Young, her saxophonist, rolling and smoking a joint. But despite the fact that at the time, "Billie Holiday's name had become a kind of password among marijuana smokers," she is only shown buying and using heroin, after which a flashback scene reveals she was pressured into prostitution as a young girl by her mother. Reason enough for anyone to do heroin.

The movie starring Queen Latifah as Smith and "Ma Rainey's Black Bottom" were similarly disappointing for not depicting the women enjoying a toke, and for staying mostly dreary while focusing on the difficulties in the singers' lives, something hard to avoid in all three stories. It was true, for instance, that Holiday's manager Louis McKay beat her so hard that she had to tape her ribs in order to perform, something depicted in the film. McKay sought out Anslinger and met with him in DC, agreeing to set Billie up for a bust for which she went to trial, jail, and an even worse punishment: the loss of her cabaret license enabling her to sing in clubs. 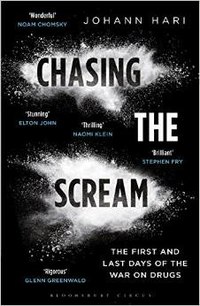 Johann Hari's excellent book Chasing the Scream was the basis for this movie. As Hari tells it, a BNE agent named Jimmy Fletcher, a black man, was assigned to bust her but instead became a fan because she was "the loving type." (In the movie, it was because he saw her naked.) Another agent of Anslinger's, George White, a CIA agent who was part of the MK-ULTRA experiments, possibly set her up for the bust at the Mark Twain hotel in San Francisco that lead to her death handcuffed to her bed in an SF hospital surrounded by cops at the age of 44.

As told on the podcast "Great Moments in Weed History," Anslinger's plan to do a mass roundup of reefer-smoking jazz musicians in the manner of roundups of lefty labor activists was derailed by the community's commitment not to snitch each other out. So Anslinger's venom got shot at a single target: Billie Holiday. "We really do have a smoking gun, because almost after Holiday's first performance of 'Strange Fruit' in 1939, she is contacted by the FBN," noted Great Moments host and cannabis researcher/author David Bienenstock.

"It's a war on drugs, not on you lady," says an interviewer in the film. "Yeah, that's what they want you to believe," replied Holiday. A good reminder that the so-called War on Drugs is actually a war on the people who use them, and an often convenient one for political purposes.
Anslinger's final legacy was the 1962 UN Treaty outlawing marijuana worldwide, while linking pot use to communism. He finally retired under JFK and died dosed with morphine. His grave in Hollidaysburg, PA has become a sort of pilgrimage for peaceful pothead protestors to his gruesome legacy. I have an idea: let's dedicate Hollidaysburg to Billie Holiday. (The town has another dubious connection: Hedda Hopper was also born there.)
Posted by Tokin Woman at 2:45 PM