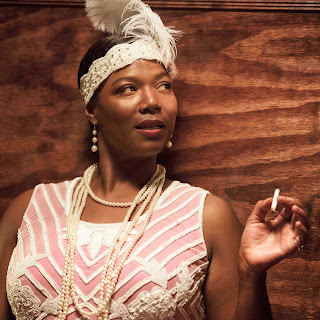 I've been eagerly anticipating the performance of Queen Latifah as Bessie Smith on HBO, which premiered tonight. It's brave, it's well acted, it's a good story. It just isn't Bessie's.

My first thought, having seen the trailer to the "Entourage" movie as the intro to "Bessie," was, "Why are women never allowed to have fun on film, only men?"

Bessie Smith was by all accounts I've read a bon vivant, bright light and huge talent who enjoyed reefers with her gin. Why then, does the film version of her life focus on any negative, real or imagined, it can muster? According to more reputable sources, for example, her terrible relationship with her sister in the film is nothing like the one in real life. The Queen really belts it in "Bessie," and I wish there had been more music and less so-called plot. It's interesting however that the good man in her life turns out to be her bootlegger (one wonders if he was also her pot dealer).

Latifah grabs a cigarette in a bar in the film (only to have the purveyor beaten by her rotten first husband), but otherwise there's no smoking in it, just drinking. The only time being "high, and drunk" (to distinguish the two) is mentioned is when she's having her child taken away from her (a situation that continues until today).

I waited for "Gimmie a Pigfoot," Smith's signature song; in the last verse she sang, "Gimmie a Reefer." But instead, the HBO version introduces the song just after Smith is stabbed, and shows her giving the intro, but not singing the song. You have to wait until just about the final second of the film over the credits to hear the word, in a version that sounds like Smith's own but is over sweetened with orchestration.

In real life, Bessie died in a car accident in 1937, the year marijuana was effectively made illegal in the US. It was alleged that she was turned away from a "Whites Only" hospital for treatment. Considering how the US government hounded Billie Holiday to death, it's not unimaginable that Smith was another victim of the War on Negroes and Others Who Use Drugs (Especially Those of Color, or Uppity Women).